Medications used by many older people to control their blood pressure also increase the risk of serious fall injuries by 30% to 40% — injuries that have a similar effect on mortality and functional loss as the strokes and heart attacks the blood pressure drugs are meant to prevent — according to a new study by Yale School of Medicine researchers in the Feb. 24 issue of JAMA Internal Medicine.

Clinicians have long assumed that blood pressure medications are safe and effective in all older adults. That is probably true in healthy older adults, but the same might not be true in a more typical population of older adults, who commonly have several other chronic conditions, note the researchers. 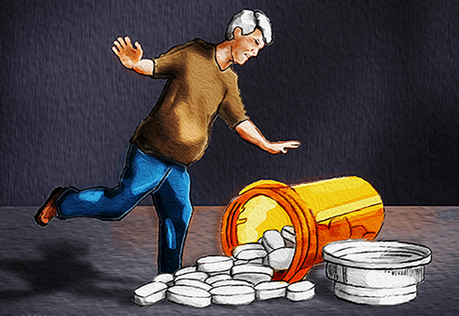 “Although no single study can settle the question and we cannot exclude the possibility that factors other than the medications accounted for the increased risk of injury, these medications may be more harmful in some individuals than thought,” said lead author Dr. Mary E. Tinetti, the Gladys Philips Crofoot Professor of Medicine and Public Health and chief of the Section of Geriatrics at Yale School of Medicine.

Fall-related injuries like hip fractures and brain injuries are among the most common, disabling and expensive health conditions experienced by older adults. Falls account for 10% of emergency department visits and 6% of hospitalizations among those over age 65. Falls can also lead to functional decline, placement in a nursing home, restricted activity, and death.

“Older patients and their clinicians need to weigh the harms as well as the benefits in prescribing medications, particularly when the harms may be at least as serious as the diseases and events we hope the medications prevent,” said Tinetti. “Patients may find themselves in the tough position of either choosing to continue their blood pressure medication and risk side effects that could lead to life-altering falls, or discontinuing their medications and risk heart attacks and stroke.”

The study was funded by the National Institute on Aging.