Law enforcement officials who are tasked with identifying a body based on partial skeletal remains have a new tool at their disposal. A new paper from North Carolina State University researchers details how to determine the biological sex of skeletal remains based solely on measurements of the seven tarsal bones in the feet.

“Tarsals are fairly dense bones, and can be more durable than other bones – such as the pelvis – that are used to determine biological sex,” says Dr. Troy Case, an associate professor of anthropology at NC State and co-author of a paper describing the research. “Also, the tarsal bones are often enclosed in shoes, which further protects them from damage. That’s particularly useful in a forensic context.” The tarsals are the seven bones that make up the ankle, heel and rear part of the arch in a human foot. 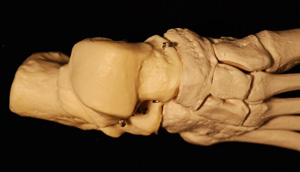 The tarsals are the bones that make up the ankle, heel and rear part of the arch in a human foot. Image credit: North Carolina State University

Researchers looked at the tarsal bones of 160 men and women of modern European-American descent, taking length, breadth and height measurements for each bone, with the exception of the calcaneus. For the calcaneus, or heel bone, researchers measured only its length.

Previous studies had shown that the talus – or ankle bone – and calcaneus can be fairly good indicators of biological sex. However, little research had been done on the other tarsal bones, which are significantly smaller.

However, a single measurement can be misleading. For example, a woman may be particularly tall, or a man particularly short. So the researchers looked at combinations of measurements from multiple bones, which allow them to measure the relative size of the bones to each other.

For example, researchers found that looking at the height of the talus along with the length of the third cuneiform bone – in the center of the foot – allowed them to determine the biological sex of a skeleton with 93.6 percent accuracy.

While the research has clear forensic science applications, it may also help researchers studying ancient populations. “We evaluated remains of modern European-Americans, so our findings are not directly applicable to ancient populations,” Case says. “However, it does tell us which tarsal bones are most indicative of biological sex. So, if you have a large number of skeletons, and some of them can be sexed based on skull or pelvis measurements, you could use the information we’ve provided on tarsals to create equations for sexing the other skeletal remains in that group based solely on tarsal measurements.”

The paper, “Sexual Dimorphism in the Tarsal Bones: Implications for Sex Determination,” will appear in the March issue of the Journal of Forensic Sciences. Lead author of the paper is Sheena Harris, a former master’s student at NC State.