Analysis of data from the National Science Foundation’s South Pole Telescope, for the first time, more precisely defines the period of cosmological evolution when the first stars and galaxies formed and gradually illuminated the universe. The data indicate that this period, called the epoch of reionization, was shorter than theorists speculated — and that it ended early. 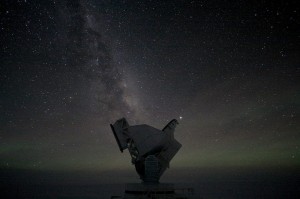 The findings by Zahn, his colleagues at UChicago’s Kavli Institute for Cosmological Physics and elsewhere have been published in a pair of papers appearing in the Sept. 1, 2012 issue of the Astrophysical Journal. Their latest results are based on a new analysis that combines measurements taken by the South Pole Telescope at three frequencies, and extends these measurements to a larger area covering approximately 2 percent of the sky. The 10-meter South Pole Telescope operates at millimeter wavelengths to make high-resolution images of the cosmic microwave background, the light left over from the big bang.

“Studying the epoch of reionization is important because it represents one of the few ways by which we can study the first stars and galaxies,” said study co-author John Carlstrom, the S. Chandrasekhar Distinguished Service Professor in Astronomy & Astrophysics.

Before the first stars formed, most matter in the universe took the form of neutral hydrogen atoms. The radiation from the first stars transformed the neutral gas into an electron-proton plasma. Observations with the Wilkinson Microwave Anisotropy Probe satellite of polarized signals in the CMB indicate that this epoch occurred nearly 13 billion years ago, but these observations give no indication of when the epoch began or how long it lasted.

The first stars that formed were probably 30 to 300 times more massive than the sun and millions of times as bright, burning for only a few million years before exploding. The energetic ultraviolet light from these stars was capable of splitting hydrogen atoms back into electrons and protons, thus ionizing them.

The South Pole Telescope recorded temperature fluctuations in the cosmic microwave background, the light left over from the big bang, to study the period of cosmological evolution when the first stars and galaxies formed early in the history of the universe. Image courtesy of South Pole Telescope collaboration

Scientists believe that during reinoization, the first galaxies to form ionized “bubbles” in the neutral gas surrounding them. Electrons in these bubbles would scatter with light particles from the cosmic microwave background. This would create small hot and cold spots in the CMB depending on whether a bubble is moving toward or away from Earth. A longer epoch of reionization would create more bubbles, leading to a larger signal in the CMB.

The epoch’s short duration indicates that reionization was more explosive than scientists had previously thought. It suggests that massive galaxies played a key role in reionization, because smaller galaxies would have formed much earlier. Rapid reionization also argues against many proposed astrophysical phenomena that would slow the process.

“We expect to measure the duration of reionization to within 50 million years with the current survey,” said study co-author Christian Reichardt, a Berkeley astrophysicist. “With planned upgrades to the instrument, we hope to improve this even further in the next five years.”

The 280-ton South Pole Telescope stands 75 feet tall and is the largest astronomical telescope ever built in Antarctica’s clear, dry air. Sited at the National Science Foundation’s Amundsen-Scott South Pole station at the geographic South Pole, it stands at an elevation of 9,300 feet on the polar plateau. Because of its location at the Earth’s axis, it can conduct long-term observations of a single patch of sky.

The South Pole Telescope is primarily funded by the NSF’s Office of Polar Programs. Partial support also is provided by the NSF-funded Physics Frontier Center of UChicago’s Kavli Institute for Cosmological Physics, the Kavli Foundation, and the Gordon and Betty Moore Foundation.