The reappearance of long-forgotten habitats and the resurgence of species unseen for years may not be among the expected effects of a natural disaster.

Yet that’s exactly what researchers found in a study of the sandy beaches of south central Chile, after an 8.8-magnitude earthquake and devastating tsunami in 2010.

Their study also revealed a preview of the problems wrought by sea level rise–a major symptom of climate change.

In a scientific first, researchers from Southern University of Chile and the University of California, Santa Barbara (UCSB) were able to document the before-and-after ecological impacts of such cataclysmic occurrences.

A paper appearing on May 2, 2012, in the journal PLoS ONE details the surprising results of their study, pointing to the potential effects of natural disasters on sandy beaches worldwide. 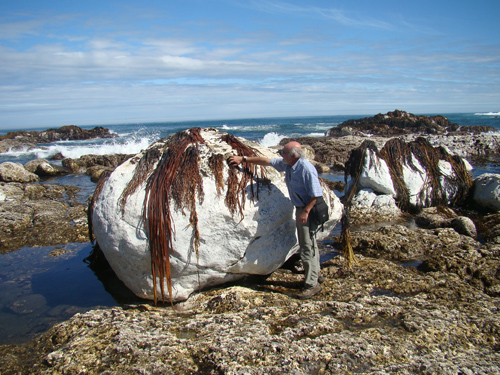 The study is said to be the first-ever quantification of earthquake and tsunami effects on sandy beach ecosystems along a tectonically active coastal zone.

“So often you think of earthquakes as causing total devastation, and adding a tsunami on top of that is a major catastrophe for coastal ecosystems,” said Jenny Dugan, a biologist at UCSB.

“As expected, we saw high mortality of intertidal life on beaches and rocky shores, but the ecological recovery at some of our sandy beach sites was remarkable.

“Plants are coming back in places where there haven’t been plants, as far as we know, for a very long time. The earthquake created sandy beach habitat where it had been lost. This is not the initial ecological response you might expect from a major earthquake and tsunami.”

Their findings owe a debt to serendipity. 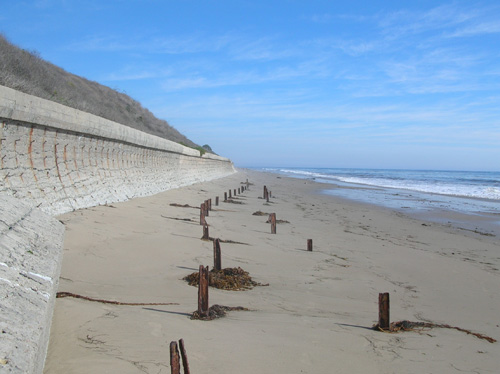 At a beach in Calif. called Arroyo Quemado, waves wash to the seawall during high tide. Image credit: David Hubbard

The researchers were knee-deep in a study supported by FONDECYT in Chile and the U.S. National Science Foundation’s (NSF) Santa Barbara Coastal Long-Term Ecological Research (LTER) site of how sandy beaches in Santa Barbara and south central Chile respond, ecologically, to man-made armoring such as seawalls and rocky revetments.

By late January, 2010, they had surveyed nine beaches in Chile.

The earthquake hit in February. 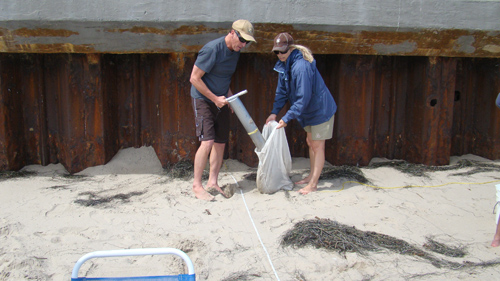 Recognizing a unique opportunity, the scientists changed gears and within days were back on the beaches to reassess their study sites in the catastrophe’s aftermath.

They’ve returned many times since, documenting the ecological recovery and long-term effects of the earthquake and tsunami on these coastlines, in both natural and human-altered settings.

“It was fortunate that these scientists had a research program in the right place–and at the right time–to allow them to determine the responses of coastal species to natural catastrophic events,” said David Garrison, program director for NSF’s coastal and ocean LTER sites.

The magnitude and direction of land-level change resulting from the earthquake and exacerbated by the tsunami brought great effects, namely the drowning, widening and flattening of beaches.

The drowned beach areas suffered mortality of intertidal life; the widened beaches quickly saw the return of biota that had vanished due to the effects of coastal armoring. 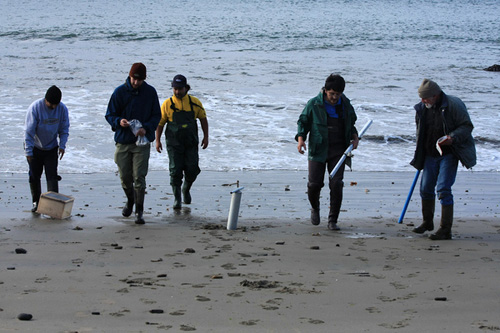 “With the study in California and Chile, we knew that building coastal defense structures, such as seawalls, decreases beach area, and that a seawall results in the decline of intertidal diversity,” said lead paper author Eduardo Jaramillo of the Universidad Austral de Chile.

“But after the earthquake, where significant continental uplift occurred, the beach area that had been lost due to coastal armoring has now been restored,” said Jaramillo. “And the re-colonization of the mobile beach fauna was underway just weeks afterward.”

The findings show that the interactions of extreme events with armored beaches can produce surprising ecological outcomes. They also suggest that landscape alteration, including armoring, can leave lasting footprints in coastal ecosystems. 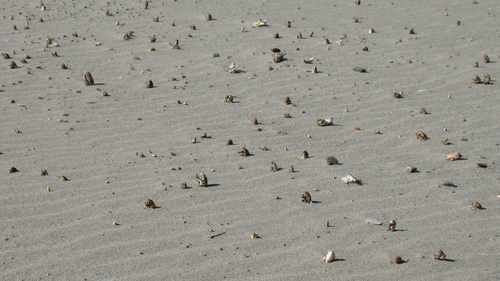 Dead sand crabs washed up on the shore of a beach in Chile. Image credit: Eduardo Jaramillo

“When someone builds a seawall, beach habitat is covered up with the wall itself, and over time sand is lost in front of the wall until the beach eventually drowns,” said Dugan.

“The semi-dry and damp sand zones of the upper and mid-intertidal are lost first, leaving only the wet lower beach zones. This causes the beach to lose diversity, including birds, and to lose ecological function.” 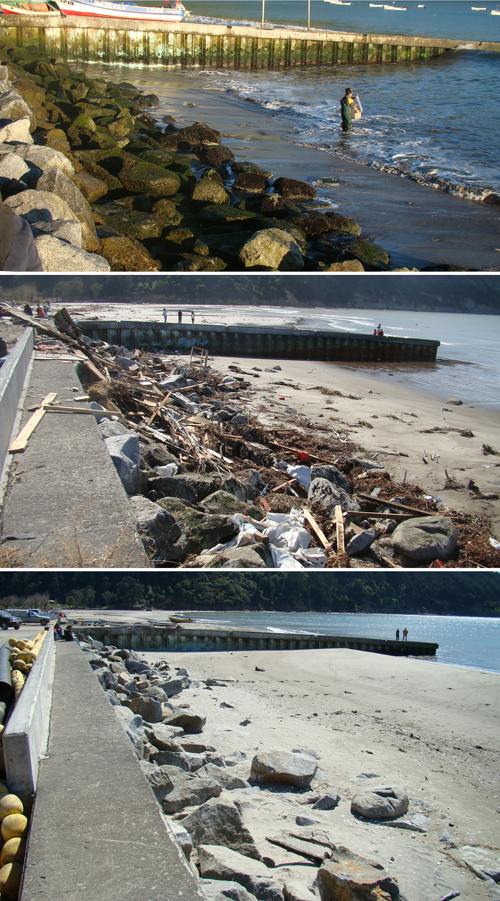 Sequence of photos of sand beach (top to bottom) before, right after, and six months after the Chile quake. Image credit: Eduardo Jaramillo