The microscopic phytoplankton Aureococcus anophagefferens, which causes devastating brown tides, may be tiny but it’s a fierce competitor.

In the first genome sequencing of a harmful algal bloom species, researchers found that Aureococcus’ unique gene complement allows it to outcompete other marine phytoplankton and thrive in human-modified ecosystems, which could help explain the global increases in harmful algal blooms (HABs).

The research team, led by Christopher Gobler of Stony Brook University’s School of Marine and Atmospheric Sciences in collaboration with scientists from the Woods Hole Oceanographic Institution (WHOI), will publish its findings online in the February 21 edition of the Proceedings of the National Academy of Sciences.

The brown tides caused by Aureococcus do not produce toxins that poison humans, but the long-lasting blooms are toxic to bivalves and have decimated sea grass beds and shellfisheries leading to billions of dollars in economic losses. The blooms, which had not been documented before 1985, are now chronic, annual events in estuaries along the heavily populated coastlines of the eastern United States and South Africa. While HABs occur naturally, impacts from human activities, such as increased pollutants and excess nutrients from fertilizer runoff, have been linked to the rise in HAB outbreaks. Like many other HABs, Aureococcus blooms in shallow estuaries where light levels and inorganic nutrients are low, and organic carbon and nitrogen concentrations are high. 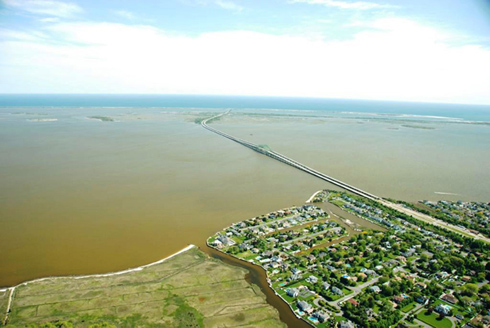 The brown tides caused by Aureococcus anophagefferens—like the one above in Long Island, NY—do not produce toxins that poison humans, but the long-lasting blooms are toxic to bivalves and have decimated sea grass beds and shellfisheries leading to billions of dollars in economic losses. Image credit: Christopher Gobler, Stony Brook University School of Marine and Atmospheric Sciences

The 56-million base pair Aureococcus genome was sequenced in 2007 by the Department of Energy’s Joint Genome Institute from a culture isolated from the shores of Long Island, NY—one of the areas most affected by the HAB. Members of the Aureococcus Genome Consortium then compared the genome with other phytoplankton inhabiting the estuaries where Aureococcus blooms. They found Aureococcus shows genome-encoded advantages over its competitors and is genetically predisposed to exploit certain characteristics of human-modified coastal ecosystems.

“There are things it can do that the other algae can’t, and those advantages are encoded at the genome level,” said Sonya Dyhrman, a biologist at WHOI and co-author of the paper. “For example, it’s well-adapted to low light conditions and can survive for long periods in no light. Aureococcus had 62 light-harvesting genes whereas its competitors had, on average, a couple of dozen.”

The photosynthetic microalga also shows advantages when it comes to metabolizing organic matter—particularly organic nitrogen and organic carbon—and handling what would normally be toxic amounts of metals, like copper. Aureococcus also has a larger number of selenoproteins, which use the trace element selenium to perform essential cell functions. 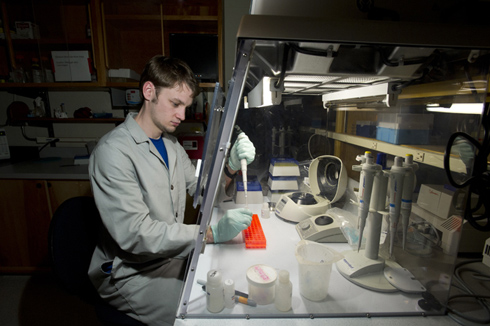 New advances in the field of genomics have allowed researchers to better address difficult questions in environmental biology. Gobler described this new “ecogenomic” approach—applying molecular techniques to ecological and environmental science—as a particularly powerful tool for understanding the dominance of different harmful algal blooms within different ecosystems around the world.

“It’s really exciting to be able to apply these new tools and a molecular approach to old questions about how organisms are functioning and interacting with their environment,” Dyhrman said. “I’ve been interested in these kinds of questions since graduate school, but we simply did not have the tools then to approach it in this way. We now have a huge new tool kit and are able to look at these questions in a much more specific way than ever before.”

“I think this paper says it all,” added Don Anderson, Director of the U.S. National Office for Harmful Algal Blooms and a senior scientist at WHOI. “Here’s a species that blooms and for years people have been trying to understand why it blooms, when it blooms, how it is able to do that when there are so many other competing species in the water with it. With this new genomic data you have a new approach. You’re getting answers based on the genes, though you still need other approaches that are more oceanographic and chemical to go along with the inferences drawn from the presence and absence of genes. It’s a great advance. It’s a great resource for our community—the more we learn about Aureococcus, the easier it’s going to be learn about the other HAB species.”

The research team will now start looking at Aureococcus’ RNA and trying to determine when and how different genes are expressed throughout the lifetime of the bloom.

“By looking at when the genes are transcribed through the bloom, we’re hoping to provide the next piece in the puzzle—understanding how the genes are responding to the environment and what is fueling and causing the demise of blooms,” Dyhrman said.

The long-term goal is to be able to keep blooms from occurring or at least be able to better predict and manage when blooms occur.

“We now know this organism is genetically predisposed to exploit certain characteristics of coastal ecosystems. We also know the characteristics are there because of activities of man,” Gobler said. “If we continue to increase, for example, organic matter in coastal waters, then it’s going to continue to favor brown tides since it’s genetically predisposed to thrive in these conditions.”