SAN FRANCISCO — Satellite observations have revealed the first direct evidence of smoke from Arctic wildfires drifting over the Greenland ice sheet, tarnishing the ice with soot and making it more likely to melt under the sun.

At the American Geophysical Union meeting this week, an Ohio State University researcher presented images from NASA’s Cloud-Aerosol Lidar and Infrared Pathfinder Satellite Observation (CALIPSO) satellite, which captured smoke from Arctic fires billowing out over Greenland during the summer of 2012.

Jason Box, associate professor of geography at Ohio State, said that researchers have long been concerned with how the Greenland landscape is losing its sparkly reflective quality as temperatures rise. The surface is darkening as ice melts away, and, since dark surfaces are less reflective than light ones, the surface captures more heat, which leads to stronger and more prolonged melting.

Researchers previously recorded a 6 percent drop in reflectivity in Greenland over the last decade, which Box calculates will cause enough warming to bring the entire surface of the ice sheet to melting each summer, as it did in 2012.

But along with the melting, researchers believe that there is a second environmental effect that is darkening polar ice: soot from wildfires, which may be becoming more common in the Arctic.

“Soot is an extremely powerful light absorber,” Box said. “It settles over the ice and captures the sun’s heat. That’s why increasing tundra wildfires have the potential to accelerate the melting in Greenland.” 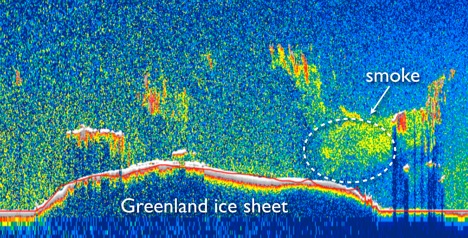 NASA CALIPSO satellite scan over Greenland. The circled region (right) is among those researchers have identified as sooty aerosols from wildfires. Image by Jason Box, courtesy of Ohio State University.

Box was inspired to investigate tundra fires after his home state of Colorado suffered devastating wildfires this past year. According to officials, those fires were driven in part by high temperatures.

Meanwhile, in the Arctic, rising temperatures may be causing tundra wildfires to become more common. To find evidence of soot deposition from these fires, Box and his team first used thermal images from NASA’s Moderate Resolution Imaging Spectroradiometer (MODIS) to identify large fires in the region. Then they used computer models to project possible smoke particle trajectories, which suggested that the smoke from various fires could indeed reach Greenland.

Finally, they used that information to examine the CALIPSO data, and pinpoint sooty aerosols—smoke clouds—over Greenland.

Because the only way to truly measure the extent to which soot particles enhance melting is to take ice sheet surface samples, Box is organizing a Greenland ice sheet expedition for 2013. The Dark Snow Project expedition is to be the first of its kind, made possible by crowd-source funding.

The analysis of the MODIS and CALIPSO data was supported by the Ohio State University’s Climate, Water and Carbon initiative. Collaborators on the fire study include Thomas Painter of NASA’s Jet Propulsion Laboratory and graduate student McKenzie Skiles of the University of California, Los Angeles.