PASADENA, Calif. – Scientists with NASA’s Cassini mission have spotted what appears to be a miniature, extraterrestrial likeness of Earth’s Nile River: a river valley on Saturn’s moon Titan that stretches more than 200 miles (400 kilometers) from its “headwaters” to a large sea. It is the first time images have revealed a river system this vast and in such high resolution anywhere other than Earth.

Scientists deduce that the river, which is in Titan’s north polar region, is filled with liquid hydrocarbons because it appears dark along its entire length in the high-resolution radar image, indicating a smooth surface.

“Though there are some short, local meanders, the relative straightness of the river valley suggests it follows the trace of at least one fault, similar to other large rivers running into the southern margin of this same Titan sea,” said Jani Radebaugh, a Cassini radar team associate at Brigham Young University, Provo, Utah. “Such faults – fractures in Titan’s bedrock — may not imply plate tectonics, like on Earth, but still lead to the opening of basins and perhaps to the formation of the giant seas themselves.” 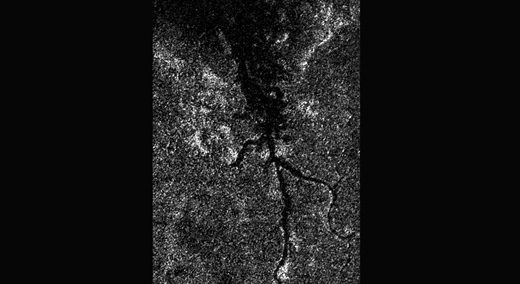 This image from NASA's Cassini spacecraft shows a vast river system on Saturn's moon Titan. It is the first time images from space have revealed a river system so vast and in such high resolution anywhere other than Earth. Image Credit: NASA/JPL-Caltech/ASI

The new image is available online at: https://www.nasa.gov/mission_pages/cassini/multimedia/pia16197.html .

Titan is the only other world we know of that has stable liquid on its surface. While Earth’s hydrologic cycle relies on water, Titan’s equivalent cycle involves hydrocarbons such as ethane and methane. In Titan’s equatorial regions, images from Cassini’s visible-light cameras in late 2010 revealed regions that darkened due to recent rainfall. Cassini’s visual and infrared mapping spectrometer confirmed liquid ethane at a lake in Titan’s southern hemisphere known as Ontario Lacus in 2008.

“Titan is the only place we’ve found besides Earth that has a liquid in continuous movement on its surface,” said Steve Wall, the radar deputy team lead, based at NASA’s Jet Propulsion Laboratory, Pasadena, Calif. “This picture gives us a snapshot of a world in motion. Rain falls, and rivers move that rain to lakes and seas, where evaporation starts the cycle all over again. On Earth, the liquid is water; on Titan, it’s methane; but on both it affects most everything that happens.”

The radar image here was taken on Sept. 26, 2012. It shows Titan’s north polar region, where the river valley flows into Kraken Mare, a sea that is, in terms of size, between the Caspian Sea and the Mediterranean Sea on Earth. The real Nile River stretches about 4,100 miles (6,700 kilometers). The processes that led to the formation of Earth’s Nile are complex, but involve faulting in some regions.