COLUMBIA, Mo. – According to estimates, the current global population is more than 7.4 billion people and is growing at a rate of 88 million people per year. Developing corn varieties that are resistant to pests is vital to sustain the estimated 9 billion global population by 2050. Now, researchers at the University of Missouri, using advanced nuclear methods, have determined the mechanisms corn plants use to combat the western corn rootworm, a major pest threatening the growth of the vital food source. Scientists believe that using the knowledge gained from these cutting-edge studies could help crop breeders in developing new resistant lines of corn and make significant strides toward solving global food shortages. 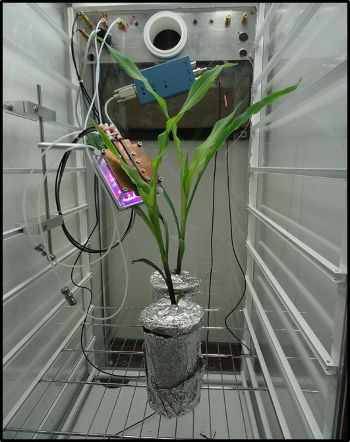 In a series of tests, the team injected radioisotope tracers in healthy and rootworm-infested corn plants. Image credit: Richard Ferrieri

“The western corn rootworm is a voracious pest,” said Richard Ferrieri, a research professor in the MU Interdisciplinary Plant Group, and an investigator at the MU Research Reactor (MURR). “Rootworm larvae hatch in the soil during late spring and immediately begin feeding on the crop’s root system. Mild damage to the root system can hinder water and nutrient uptake, threatening plant fitness, while more severe damage can result in the plant falling over.”

Breeding corn that can fight these pests is a promising alternative. Ferrieri, and his international team of researchers, including scientists from the University of Bern in Switzerland, Brookhaven National Laboratory in New York and the U.S. Department of Agriculture, used radioisotopes to trace essential nutrients and hormones as they moved through live corn plants. In a series of tests, the team injected radioisotope tracers in healthy and rootworm-infested corn plants.

“For some time, we’ve known that auxin, a powerful plant hormone, is involved in stimulating new root growth,” Ferrieri said. “Our target was to follow auxin’s biosynthesis and movement in both healthy and stressed plants and determine how it contributes to this process.”

By tagging auxin with a radioactive tracer, the researchers were able to use a medical diagnostic imaging tool call positron emission tomography, or PET imaging, to “watch” the movement of auxin in living plant roots in real time.  Similarly, they attached a radioactive tracer to an amino acid called glutamine that is important in controlling auxin chemistry, and observed the pathways the corn plants used to transport glutamine and how it influenced auxin biosynthesis.

The researchers found that auxin is tightly regulated at the root tissue level where rootworms are feeding. The study also revealed that auxin biosynthesis is vital to root regrowth and involves highly specific biochemical pathways that are influenced by the rootworm and triggered by glutamine metabolism.

“This work has revealed several new insights about root regrowth in crops that can fend off a rootworm attack,” Ferrieri said. “Our observations suggest that improving glutamine utilization could be a good place to start for crop breeding programs or for engineering rootworm-resistant corn for a growing global population.”

Ferrieri’s work highlights the capabilities of the MURR, a crucial component to research at the university for more than 40 years. Operating 6.5 days a week, 52 weeks a year, scientists from across the campus use the 10-megawatt facility to not only provide crucial radioisotopes for clinical settings globally, but also to carbon date artifacts, improve medical diagnostic tools and prevent illness. MURR also is home to a PETrace cyclotron that is used to produced other radioisotopes for medical diagnostic imaging.

The study, “Dynamic Precision Phenotyping Reveals Mechanism of Crop Tolerance to Root Herbivory,” was published in Plant Physiology. The article was authored by Brookhaven Science Associates, LLC, under contract number DE-AC02-98CH10886. The content is solely the responsibility of the authors and does not necessarily represent the official views of the funding agency.