COLUMBUS, Ohio – The serious air pollution problem in China has attracted the attention of online activists who want the government to take action, but their advocacy has had only limited success, a new study has revealed.

Instead, much of the online conversation has been co-opted by corporations wanting to sell masks, filters and other products and by government officials advancing its own environmental narrative, the study finds.

Researchers at The Ohio State University analyzed about 250,000 posts on the Chinese social media site Sina Weibo (similar to Twitter) that discussed the pollution problem in the country. 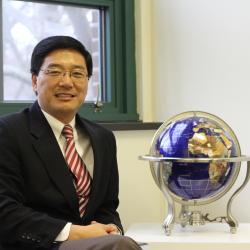 They concluded that online activists did force the Chinese government to take some actions to tackle the pollution problem. But they also found that business and government dominated much of the conversation and used it to their own advantage.

“Social media has been touted as a ‘liberation technology’ for citizens, but we found the story wasn’t so straightforward in China,” said Daniel Sui, co-author of the study and professor of geography at Ohio State.

“Along with the positive gains brought by social media, there were negatives.”

Sui conducted the study with Samuel Kay and Bo Zhao, both graduate students at Ohio State at the time of the study. Their findings appear online (article available here) in the journal The Professional Geographer.

The researchers used a custom-built web-crawler, designed by Zhao and housed on servers at Ohio State’s Center for Urban and Regional Analysis, to search for air pollution-related posts on Sina Weibo from October 2012 to June 2013.

They also traveled to China to interview citizens and collect media coverage, government reports, diplomatic communications and public statements made by officials.

Sui said he and his students saw first-hand the air pollution problem in the country.

“Last summer all three of us were in Beijing and one day the smog was so bad that you literally couldn’t see the building across the street,” he said.

Two photos taken in the same location in Beijing in August 2005. The photograph on the left was taken after it had rained for two days. The right photograph shows smog covering Beijing in what would otherwise be a sunny day. Photo credit: Bobak Ha’Eri (Source: Wikipedia)

For decades, the Chinese government blamed hazy days on fog or dust. Government reports completely ignored certain pollutants, such as PM2.5, which is airborne particulate 2.5 micrometers or less in diameter. Because of its small size, PM2.5 can penetrate deep into the cardiovascular and respiratory systems.

But when the U.S. Embassy in Beijing began publishing air quality data on its official Twitter feed in 2008, local citizens began to take notice, Sui said.

Chinese citizens began posting about the issue on Sina Weibo, wondering why there wasn’t official information on PM2.5 and asking for action by the Chinese government.

“Social media raised public awareness and pressured the government to take some action. It had enormous power that way. Otherwise, the government wouldn’t have done as much as they have,” Sui said.

But the improvements in pollution have been relatively modest, and the researchers found that companies, the government and a few opinion leaders have been able to largely shape the online discussion along narrow and often profitable lines.

Sui and his students found that just one-tenth of 1 percent of the users of Sina Weibo in this discussion held more than 60 percent of what is called the “weighted-in degree,” which is a measure of user influence. More than 80 percent of these top accounts belonged to government sources, companies or other organizations, while only 20 percent belonged to individuals.

“The most influential users in the debate were almost entirely composed of government sources, companies or famous individuals,” Sui said.

Corporations used Sina Weibo to push products specifically designed to appeal to anxious citizens. One company advertised an air filtration system on Sina Weibo, saying that it was “using the most advanced technology for the filtration of PM2.5” and will enable customers to “breathe healthier air.”

The attitude of corporations on social media was that Chinese citizens could simply avoid the air pollution problem – if they could afford to buy these specialized products.

Sui said the Chinese government response on Sina Weibo was to attempt to “make air pollution a scientific rather than a political problem.”

The government tried to give the impression that the air pollution problem could be solved mostly through technological fixes without hurting economic growth.

Sui said this case study shows both the power and the limits of online activism in China.

“Citizens acting online made some real changes to how the government handled the air pollution problem, but government and corporations used the same online tools to advance their own agendas as well,” he said.

The study was funded by a grant from the National Science Foundation.