Fifty years later: ‘I have a dream’

Fifty years ago, on August 28, 1963, a young preacher delivered a speech that would go down as one of the most important and powerful in all of American history. “I Have a Dream” became the cornerstone of the March on Washington, a march which galvanized a people and energized the civil rights movement. One year later, the Civil Rights Act was signed into law by President Lyndon Johnson.

Seven months earlier to the day, Martin Luther King Jr. delivered a speech to a crowd of about 2,000 on the U of M campus in Northrop Auditorium. The cover of January 29, 1963 Minnesota Daily read, “Much Remains in Path to Freedom—Dr. King.”

King told the crowd on Jan. 28 just that—much had been accomplished, but there was still a great deal to be done. 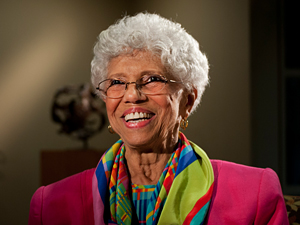 Today, for Josie R. Johnson, that message is the same. She was at the March on Washington, 33 years old and with a delegation of about 60 Minnesotans.

“We left very early in the morning—3 or 4 a.m., and when we got to DC everything was very quiet. We didn’t see anybody. We went to a church to have coffee and donuts, and Hubert (Humphrey) came, and Walter Mondale…but I was very worried—because I didn’t see anybody. And my fear was that it was going to be a failure. Such an effort, all the plans…and if no one showed up it would look as if the effort for civil rights has failed,” she says.

A leader in Minnesota

Josie Johnson was—is, even at 83—a leader in civil rights and social justice in Minnesota. She was the first African American elected to the U of M Board of Regents, and one for whom the U’s annual Josie R. Johnson Human Rights and Social Justice Award was established.

Her fears that day were not realized. Crowds were estimated to be near 300,000. People came by the busload from all over the United States.

And when she heard Dr. King speak, she says, “…it was like a prayer. His words were so powerful. He began to talk about his dream—the dream we all have for America—that things that are fair and just will happen in your lifetime… and there was such a hush over that crowd—a quarter million or more people. I wept. I could hardly believe that someone could deliver such a powerful speech. And for him to say that he dreamed his children would be evaluated on their character meant a lot to us parents, who hoped the same for our children,” says Johnson, who at the time had children of her own aged 5, 7, and 9. 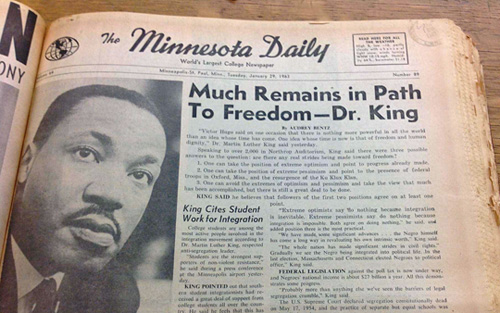 Seven months before his famous speech in Washington, Dr. King delivered a speech to a crowd of about 2,000 in Northrop Auditorium. Image courtesy Minnesota Daily

Not far away in Baltimore on that day, U of M professor Sam Myers was readying himself for his first year of high school.

“I was a swimmer. And in 1963 I began my freshman year in high school and went out for the swimming team,” says Myers. “But swimming pools in Baltimore were segregated by law—because…the view was that it would be immoral to have Negroes in the water with white females. We couldn’t practice with the white team—we couldn’t do relays with the white teams…so I’m trying to tell you, in 1963 segregation was a way of life. It was well understood in Baltimore where I grew up—right across the street from where the march was held. This was accepted.”

“I don’t think the average American knows that the earnings gap, the income gap, the unemployment gap is the same—is the same in 2013 as it was in 1963. It is just hard to comprehend,” says Myers. “The ratio of black unemployment to white unemployment in 1963 is exactly the same as it is in 2013,” he says.

“What we did in 1963 was needed at the time—but there is still a lot more work that needs to be done. On a number of significant measures of socioeconomic progress—we’re not that much better off 50 years later,” he says.

Josie Johnson couldn’t have known it at the time, but near where she and 60 other Minnesotans stood at the back of the reflecting pool that day, facing the Lincoln Memorial on the National Mall, was a girl of 16—a future Minnesotan, born and raised in DC, standing on a bench to see Dr. Martin Luther King Jr.

Patricia Whyte is now the director of the Office for Diversity in Graduate Education at the U of M. She’s been at the U working in diversity issues for 30 years.

“It was so quiet in Washington that day…more quiet than the middle of the night,” she says. People were worried about the potential for violence, she says, including Whyte’s father, who told her she could not go to the march.

“But I had an ally in my mother. I was at breakfast and I said, you know, there’s going to be this march, daddy—and I can’t imagine why we wouldn’t go,” she says. “And so it was decided that he was going to stay, but mother and I would go—because if someone spit on him, there was going to be a fight,” she says.

She says of the social climate at the time, “Many of my relatives and folks thought he was upsetting the apple cart—this young preacher who was a rabble rouser, stirring things up. And they kind of bought into the rhetoric going on around the country in that regard. Until they saw dogs turned on people. And the fire hoses turned on people. And then it became a matter of pride—of racial pride to affiliate with this man,” she says.

Whyte later went on to integrate into a largely white college, Defiance College in Ohio, because in part, she says, “Doors had been opened—and if we don’t walk through those doors, they are going to close.”

There were 10 students of African descent in her class, she says. Twenty total of about 1,200 students at the college.

“I know because we used to count each other, because that’s what you do when you’re all by yourself,” says Whyte.

“Even today, I still feel a part of this vanguard that was going make America better,” she says.

For Josie Johnson, the 50th anniversary is an opportunity for America to have a conversation again, to move to the next step.

“I would like to believe, as Dr. King said, that someday, our children…but I’m not so sure…” says Johnson.

“I think society is more conscious of color, of position…than they’ve ever been. I think that 2013 is a time when all people need to recommit—to justice, and freedom, and equality. And that’s all people. Because you can dream forever. But it has to become real…”