A woman’s supply of eggs is a precious commodity because only a few hundred mature eggs can be produced throughout her lifetime and each must be as free as possible from genetic damage. Part of egg production involves a winnowing of the egg supply during fetal development, childhood and into adulthood down from a large starting pool. New research by Carnegie’s Alex Bortvin and postdoctoral fellow Safia Malki have gained new insights into the earliest stages of egg selection, which may have broad implications for women’s health and fertility. The work is reported in the early on-line edition of Developmental Cell.

The most stringent egg selection takes place at the earliest stages. Even before a baby girl is born, she has already lost 80 percent of her initial pool of immature eggs during fetal development. This phenomenon has been observed in primates and rodents, as well as some invertebrates, which indicates that it has been around for a long time evolutionarily speaking. But despite its ancient origins, little is understood about how these decisions are being made. 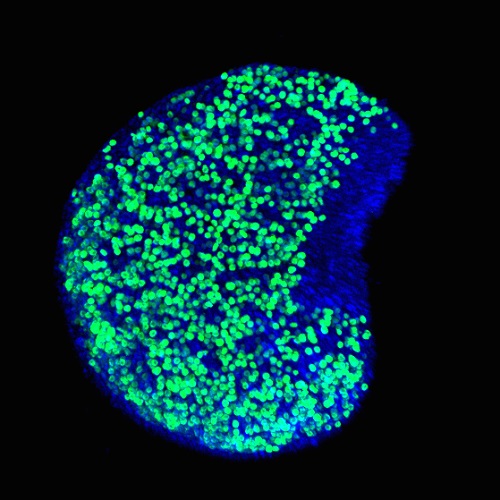 This image shows mouse fetal ovary whose eggs (colored green) were protected from dying by AZT. Blue color identifies genomic DNA in all cells of the ovary. Image is courtesy of Safia Malki.

Bortvin’s team discovered that the fetal egg die-off is connected to segments of the egg’s DNA known as transposable elements or “jumping genes.” As developing eggs gain the ability to guide embryo development, transposons gain the ability to start moving. These ancient virus-like genes begin to leapfrog around the egg’s DNA, thereby producing new mutations, just as transposon movement causes color mutations in ears of corn. A transposable element named LINE1 is the most likely to become activated in mammalian eggs.

Jumping genes can be particularly destructive in sperm and eggs, since much of their genetic material is an essential part of the recipe for developing a healthy baby. Think of the genome of an egg or sperm as a stack of papers being photocopied. In order to be read and understood, they have to come out of the copier in the same order they went into it. But jumping genes are like pages that insert themselves at random into the stack, making the reading process difficult or even impossible.

Prior studies by Bortvin and others showed that male germ cells quash the movement of transposons, minimizing mutations and ensuring high levels of sperm production. In contrast, Bortvin and Malki discovered that female mice allow transposon movement to take place, but then get rid off immature eggs harboring the highest number of mutations before the female mouse is even born. The team proposes that this purging process allows for the selective survival of immature eggs whose genetic material has acquired relatively few new mutations.

Bortvin’s group also discovered that the process of immature egg purging must be finely balanced. Overly stringent surveillance could result in excessive egg purging, too few surviving eggs, and premature loss of fertility. Surveillance that is not stringent enough, on the other hand, would allow eggs with a lot of jumping gene-related errors to survive, and lead to a high level of birth defects, such as those caused by an incorrect number of chromosomes in the offspring.

“Our findings suggest that the ovary of a newborn girl already contains both ‘good’ eggs and those destined to give rise to Down syndrome or miscarriages,” Bortvin said. “Further study may show that these ‘good’ cells are ovulated first and the abnormal ones usually come later.”

Importantly, Bortvin and Malki discovered that a drug AZT, which inhibits multiplication of AIDS-causing HIV virus in humans, also alters jumping gene activity in immature eggs. In particular, it is effective against LINE1 transposons. This discovery raises the possibility that the number and quality of immature eggs might be enhanced by drug treatment.

Finally, Bortvin and Malki’s work raises the question of whether this immature egg purge is actually a blessing in disguise. Despite their destructive power, jumping genes are also the source of serendipitous genetic novelty that can make species stronger and better suited for survival over time. By allowing just the right amount of beneficial transposon-generated genetic variation, female mammals are giving their offspring and species the best chance of thriving in an uncertain, dangerous world.