Females of a little-known primate from the rainforests of Madagascar have been known to outlive their male peers by many years, despite no obvious differences in hormone levels or lifestyle. A team led by a UA anthropologist has found the likely answer to the mystery.

Researchers studying aging in an endangered lemur species report that in old age, females are the safer sex: They live much longer than their male peers.

Females tend to outlive males in many animals, including humans. But in the Milne-Edwards’ sifaka – a rainforest-dweller with orange-red eyes, a black face and woolly dark brown fur – the sexes didn’t seem to differ in any of the ways thought to give females a survival advantage in other animals.

In this species, the females are the dominant sex, explained Stacey Tecot, an assistant professor in the UA School of Anthropology, who is the lead author on the study. The males defer to the females, which even have masculinized genitalia: accumulations of adipose tissue resembling male testes.

Sex differences in aggression, hormones, or appearance drive males of many species to an earlier grave.

But in the Milne-Edwards’ sifaka – pronounced “shu-FAHK” – traits that often are correlated with the sexual bias in lifespan are, at first glance, absent in this species.

Males and females grow at similar rates and reach roughly the same size, have similar coloration and are equally likely to be spotted by predators.

“They even have similar levels of testosterone, reach maturity around the same time and are equally likely to pick fights,” said Tecot, who has studied lemurs in their native habitats for a number of years.

Both sexes stray from the safety of their social groups and at the same rate, and both sexes can be aggressive toward their own or the opposite sex. In addition, males and females don’t seem to differ in the amount of energy expended or risk incurred. 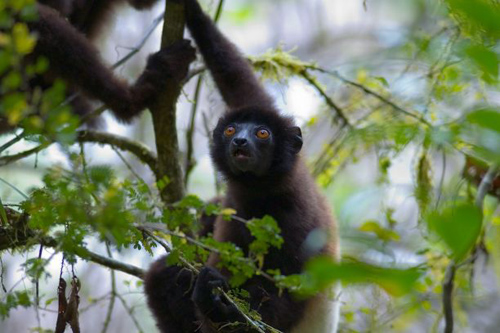 Lemurs (Latin for “ghost” or “spirit”) are primates that live only on the island of Madagascar. Most are highly endangered as their native forests succumb to an increasingly dry climate and logging. The species studied here, the Milne-Edwards’ sifaka (Propithecus diadema), is estimated to have suffered a 50-percent population loss over the past three decades. (Image credit: Jukka Jernvall)

After observing these animals for more than two decades in the wild in Madagascar, co-author Patricia Wright of Stony Brook University had a hunch that females were living longer than their male counterparts.

For the study, Tecot, Wright and their colleagues analyzed detailed records of births, deaths and dispersal behavior for more than 70 individual lemurs living in Ranomafana National Park in southeastern Madagascar – a dataset spanning 23 years from 1986 to 2009. According to the data, most males died by their late teens. The oldest documented male lived to 19 years old, but females can live into their early 30s.

What could explain the gender gap? By taking a closer look at dispersal behavior across the lifespan, the researchers think they have a clue.

In Milne-Edwards’ sifaka society, both sexes are known to leave the groups where they were born in search of a new group to call their own – sometimes dispersing repeatedly throughout their lives.

The data suggest that on average, males and females disperse equally frequently, and wander just as far. But when the researchers broke down dispersal across the lifespan, from infancy to old age, they found that males and females differed in their timing.

The differences didn’t start to emerge until later in life. Females generally stopped dispersing after a certain age, typically when they reached 11 years old. But males continued to roam their entire lives. 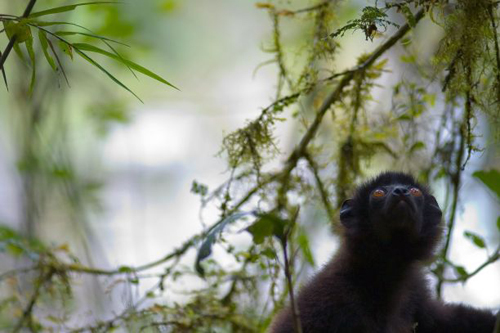 Milne-Edwards’ sifakas spend most of their lives in the forest canopy. Special adaptations to this lifestyle include a keen vision, grasping hands and feet and great coordination. When leaping between branches, this lemur can sometimes be seen making a 180-degree turn in mid-air so as to face its target site before landing hind legs first. (Image credit: Jukka Jernvall)

Researchers don’t know why females eventually settle down, whereas males continue to strike off on their own. But dispersing at older ages could carry greater costs, especially if older animals aren’t as agile or quick to heal from injury.

“When animals leave their social group, they can’t benefit from social knowledge or the additional eyes and ears that can spot predators,” Tecot said. “They have to find their own food resources, avoid other, hostile groups and escape from predators.”

Co-author Jennifer Verdolin of the National Evolutionary Synthesis Center in Durham, N.C., said: “When you’re a social animal and you go off on your own into unfamiliar territory, finding food can be more of a challenge. Plus you don’t have the extra protection of other group members who can help look out for predators. Even when you find a new group to join, you may have to fight your way in, and there’s a chance of getting injured in a fight.”

“Repeated dispersal can mean cumulative injury,” Tecot added. “Combined with aging, that can lead to an earlier demise.”

The study doesn’t help explain why women tend to outlive men in humans, the authors caution. But it does suggest that fine-scale studies of risk-taking behavior at different ages could reveal age-specific mortality risk factors that researchers hadn’t considered.

Brian Gerber of Colorado State University and Stephen King of the University of Massachusetts, Amherst also were authors of this study.