Since 2011, farmer Sean Stratman has grown kale, cauliflower, broccoli and squash in Carnation, Washington. Then, a few years ago, he added a new crop to his bounty: knowledge, using drones and the intelligent edge to get near-real-time information about issues like soil moisture and pests. It’s the kind of information that is not only helping him, but could benefit farmers around the world.

“The more data I get, the more I can correlate it to what I’m experiencing in the field, and the greater that understanding becomes,” says Stratman, whose grandfathers were also vegetable farmers. “I’m really optimistic and excited about how our knowledge will continue to grow. I have a feeling that it will become exponential at one point.”

The need is critical. In a little more than three decades, by the year 2050, the current world population of 7.6 billion is expected to reach 9.8 billion. Food production will have to increase dramatically to keep up with that growth, according to several studies. But there is a limited amount of additional arable land available for farming. 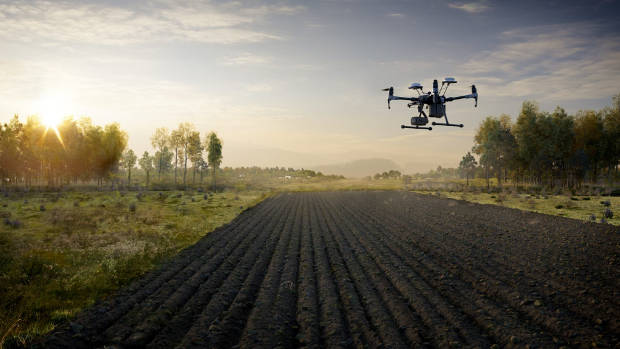 A DJI drone flies over farmland. (Image by Makeshift Studios)

A new partnership between Microsoft and leading drone maker DJI builds on the work both companies are doing with data and agriculture that could make it easier and more affordable for farmers like Stratman to quickly get the information they need to make crucial decisions about soil moisture and temperature, pesticides and fertilizer. Hours and days spent walking or driving the fields to try to detect problems can be eliminated.

Microsoft’s FarmBeats program sends large amounts of data from ground-based sensors, tractors and cameras to a computer on the farm using TV white spaces, a type of internet connectivity similar to Wi-Fi but with a range of a few miles. TV white spaces are unused TV broadcast spectrum, which is plentiful in rural areas where most farms are located, and where standard internet connections are often spotty.

New machine learning algorithms process and analyze the data, and run on the Azure Internet of Things (IoT) Edge, which delivers cloud intelligence locally, on the edge, if you will, of a larger computing network. In Stratman’s case, the “edge” is in the barn, a seemingly old-fashioned setting for a high-tech solution to help solve serious problems.

Using Azure IoT Edge, “You don’t have to send all the data to the cloud; it sits on the farm, and is able to ingest a lot of the data, apply the intelligence on top of it to generate actionable insights for the farmer,” says Ranveer Chandra, the Microsoft principal researcher who leads the FarmBeats program.

“It also makes sure that all of this data, along with the analysis, will sync with the cloud so that we have a complete, end-to-end IoT system that is able to gather a lot of data and make sense of it.”

DJI’s PC Ground Station Pro software provides on-the-fly generation of orthomosaics, or stitched aerial imagery, which are used by the FarmBeats machine learning algorithms running on the Azure IoT Edge to create detailed heatmaps. Those heatmaps enable farmers to quickly identify crop stress and disease, pest infestation or other issues that may reduce yield. The maps are transmitted using TV white space technology to the Azure IoT edge device located on the farm.

Jan Gasparic, DJI’s head of enterprise partnerships, says the Microsoft partnership means both companies, “can go a lot further together because we can leverage information that might be drone-based, but also in conjunction with ground-based or edge-based processes.”

The FarmBeats program uses DJI’s commercially available Phantom 4 Pro drone for the project at the farm Stratman manages, at other FarmBeats locations in the United States – New York, California and North Dakota – and in India. For larger farms, where there is a need for increased battery life and advanced payloads like multispectral sensors, the team is using DJI’s Matrice 200.

“This is the first time where we’ve really taken all these different components, using some of the software we’ve developed, some of the algorithms we’ve developed, our drones and the third-party sensors – and integrated all of that into a wider solution with a partner,” Gasparic says. “In terms of the complexity of what’s involved, in order to leverage all of these unique aspects, this is a first – and it’s really exciting.”

Stratman grew up in Florida, and when one of his grandfathers moved there, he commandeered his grandson’s time and help to tend a large garden.

“He inspired me in the desire for physical work,” Stratman says. “At the time, I hated it. Now that I look back on it, he actually taught me how to value putting time and energy into a piece of land, and seeing what it could bring in return for you. I think that’s when I first got a little bit of an itch for farming, and I didn’t even realize it at the time.”

With a degree in anthropology, Stratman worked as an archaeologist for a few years, focusing on indigenous agricultural techniques, how civilizations, “could have lasted for thousands of years in one area utilizing similar plots of land, and the strategies that they were applying in order to make that work. I found that really fascinating early on,” he says.

It wasn’t surprising, then, that when an opportunity arose to manage a small farm and garden owned by a five-star restaurant in Florida, Stratman eagerly signed on.

Drawn to the Pacific Northwest for its climate and growing conditions, Stratman moved to Washington in 2001, working in agriculture before establishing his own farm, Dancing Crow Farm, about 30 miles east of Seattle, in 2011. He also manages a program for the nonprofit Sno-Valley Tilth, helping others launch their own farm businesses.

Stratman is as grounded as they come – literally and personally. He isn’t drawn to shiny tech for tech’s sake, but he becomes animated when he talks about what Microsoft and DJI are bringing to agriculture.

He’s used the heatmaps to help with everything from his planting strategy – for example, whether the soil temperature is ripe for seed germination – to learning where beavers had created dams along a lengthy drainage ditch, creating flooding in some of his fields.

“This next year, I’m looking at identifying the soil humidity levels that are ideal for various soil working paths rather than putting an implement on my tractor and going out and saying, ‘The conditions are less than ideal or not right for that particular tractor implement,’” he says.

“It will be really great to look at my FarmBeats program with Azure IoT Edge, and results from the drone and say, ‘Hey, look, my soil humidity is at 40 percent; it’s time to put on the tiller.’ It’s going to be beneficial, saving me time and trouble over doing something the old-fashioned way, the hard way.”

Chandra says such precision agriculture techniques are what will enable farmers to use their resources – water, land, fertilizer – even more wisely in the future.

“It will help them become more profitable; they’ll be able to grow more crops because their yields will go up,” he says. “Whatever farming they do will be more sustainable, and it’s better for the environment. And it will help feed the world.”

Learn more about the intelligent edge in this Explanimators episode.