Male monkeys looking for a good time might benefit from spending a bit longer getting to know a potential mate, according to a new study published online in the scientific journal Proceedings of the Royal Society B.

The time males spend around a prospective mate might be the key to detecting subtle sexual signals that show which females are fertile and which are not, according to the study, co-authored by an international team of biologists and psychologists.

“The results of this study shed new light on the role that experience can play in reading others’ mating signals,” said Laurie Santos, a psychologist from Yale University who was a co-author on the study.

Scientists have long been curious about how females of some primate species, including humans, advertise their fertility and how males recognize often subtle signals. Previous research has shown that the faces of female monkeys sometimes darken when they are fertile, but not all females show exactly the same changes. So can males learn to “read” a female’s face? 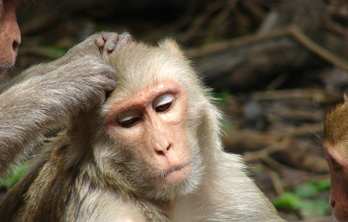 To study this question, the researchers looked at a rhesus macaque population on the island of Cayo Santiago, off the coast of Puerto Rico, testing whether males could detect when a female was ovulating from her picture alone. They presented male monkeys with two pictures of the same female’s face: one from a day on which she was ovulating, and one from a time before she was ovulating.  More than 80 percent of males from the female’s group were able to discriminate between the two faces, looking longer at the photograph in which she was ovulating than the one in which she was pre-fertile. Males who did not know the specific female in the photograph showed no such preference. This result suggests that males may increase their chance of detecting a female’s receptivity by getting to know her.

“Many primates, including humans, receive signals from individuals with whom they are familiar. How this familiarity affects how we interpret the signals we receive from others is largely unknown,” said James Higham, lead author of the study, who undertook the work while at The University of Chicago. “I think that similar familiarity effects are quite common in humans as well. How can we determine whether someone is upset or just generally grumpy, or whether someone genuinely likes something or is just always >>, unless we really know them?”

“The study raises new questions about whether familiarity might be used by the males of our own species to detect when women are fertile,” noted Santos.

The work was funded by the National Center for Research Resources, part of the National Institutes of Health.