A new assessment of global earthquake fatalities over the past three decades indicates that 83 percent of all deaths caused by the collapse of buildings during earthquakes occurred in countries considered to be unusually corrupt.

Authored by Professor Nicholas Ambraseys of the Imperial College of London and Professor Roger Bilham of the University Colorado at Boulder, the study also found that in some relatively wealthy countries where knowledge and sound business practices would be expected to prevail, the collapse of many buildings is nevertheless attributable to corrupt building practices.

A commentary piece on the subject is being published in the Jan. 13 issue of Nature.

Corrupt building practices — which are generally covert and hard to quantify — can include the use of substandard materials, poor assembly methods, the inappropriate placement of buildings and non-adherence to building codes, said the authors. 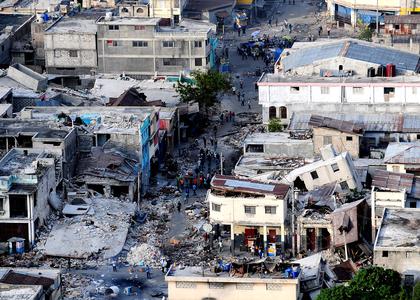 The 2010 Haiti earthquake is believed to have caused hundreds of thousands of deaths, primarily due to shoddy building construction. Image courtesy U.S. Air Force

The CPI index — which defines corruption as the abuse of entrusted power for private gain — is determined by an aggregate of 13 opinion polls averaged over two years from 10 institutions monitoring the frequency and extent of bribes paid within various countries, said Bilham, a professor in CU-Boulder’s geological sciences department. A CPI score of 0 indicates a highly corrupt nation with zero transparency, while a score of 10 indicates an absence of perceived corruption with total transparency.

The authors determined that there is roughly a one-to-one relationship between a nations’ wealth and its perceived level of corruption. “Less wealthy nations are the most corrupt,” said Bilham, also a fellow in the CU-Boulder based Cooperative Institute for Research in Environmental Sciences. “We found that fully 83 percent of all deaths from earthquakes in the last 30 years have occurred in nations where corruption is both widespread and worse than expected.”

Relative wealth is the most obvious parameter that influences a country’s corruption, according to the authors. Bilham and Ambraseys chose the gross national income per capita to compare the relative wealth of the countries. High wealth is strongly linked to countries with a stable government conducive to the rule of law, they said.

The authors noted that while a 7.0 magnitude earthquake that struck in New Zealand in 2010 resulted in zero fatalities, an identical 2010 quake in Haiti resulted in a death toll reaching six figures. “Widespread anecdotal evidence points to the collapse of structures in devastating earthquakes as a result of corrupt building practices,” said Bilham. “In this study we have attempted to quantify that perception.

“Corruption is found to be far worse in some countries than others, despite a measure of wealth that tells us they should do better,” said Bilham. “It is in the countries that have abnormally high levels of corruption where we find most of the world’s deaths from earthquakes.”

The global construction industry, currently worth $7.5 trillion annually and which is expected to double in the next decade, is recognized by experts as being the most corrupt segment of the world economy, said the authors.

Since 1980, deaths due to an absence of effective earthquake engineering activity have averaged about 18,300 per year, according to the authors.

Poverty and poor education also contribute to building collapse through a lack of strong, available building materials and a lack of education that otherwise would help guide safe building practices, the authors said.

The number of deaths attributable to collapsed dwellings is influenced both by the population density and the vulnerability of buildings near earthquake epicenters, said the authors. In the past 30 years, the rapid increases in urban populations — particularly in developing countries — have been adversely affected by building quality.

The authors said even if corrupt building practices were halted today, those residing in impoverished nations would inherit at least some structures and dwellings that were constructed while corrupt construction practices were under way.

“The structural integrity of a building is no stronger than the social integrity of the builder, and each nation has a responsibility to its citizens to ensure adequate inspection,” the authors wrote in Nature. “In particular, nations with a history of significant earthquakes and known corruption issues should stand reminded that an unregulated construction industry is a potential killer.”