Scientists from the Camborne School of Mines have conducted a ground-breaking analysis of a Martian meteorite that dates back to the formation of the Earth.

Dr Gavyn Rollinson used pioneering technology to map the mineralogy of a section of the meteorite – which was discovered in North Africa and is around 4.4 billion years old.

The revolutionary analysis, which uses QEMSCAN technology, applies an electron beam to scan the sample surface and map the chemical composition, and is thought to be the first of its kind conducted by any university worldwide. 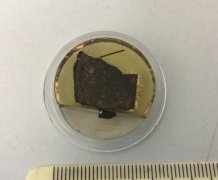 A sample of the Mars meteorite. Image credit: University of Exeter

Gavyn was hand-picked to conduct the pivotal analysis due not only to his world-class expertise, but because of the unrivalled reputation of CSM for its mineral research.

The sample was brought to Cornwall by Dr Martin Whitehouse and Dr Jeremy Bellucci, scientists at the Swedish Natural History Museum which houses the scientifically valuable meteorite.

Gavyn, the analytical laboratory manager and Experimental Officer at CSM, which is part of the University of Exeter and is located at the Penryn Campus, said: “I think we are the first university in the world to carry out this type of analysis on a Martian meteorite, using this type of technology.

“It’s a testament to our global reputation here at CSM that we were asked to help, and the results were excellent. We only had access to a small fragment of the original meteorite, but we able to map its mineralogy in very fine detail.

“When you consider the age of the meteorite, and the distance it has travelled through the solar system to reach Earth, it was a remarkable and fascinating opportunity.”

The meteorite, a smooth black rock called NWA 7533, was recovered in the Sahara Desert in 2012, and contains pieces of Mars’ original 4.4 billion crust. As one of the oldest planetary artefacts ever discovered, it offers a unique insight into some of the very earliest surface conditions after the planet was formed.

Their analysis was able to map the breccia texture of the sample in very high detail, and showed that the sample was mainly composed of pyroxenes, with K-feldspar and plagioclase feldspars, zircon, chloroapatite, Fe sulphides, chromite and ilmenite.

The meteorite is almost as old as the Earth, which is believed to be around 4.54 billion years old.