Evolution of a Bimetallic Nanocatalyst

Atomic-scale snapshots of a bimetallic nanoparticle catalyst in action have provided insights that could help improve the industrial process by which fuels and chemicals are synthesized from natural gas, coal or plant biomass. A multi-national lab collaboration led by researchers with the U.S. Department of Energy (DOE)’s Lawrence Berkeley National Laboratory (Berkeley Lab) has taken the most detailed look ever at the evolution of platinum/cobalt bimetallic nanoparticles during reactions in oxygen and hydrogen gases.

“Using in situ aberration-corrected transmission electron microscopy (TEM), we found that during the oxidation reaction, cobalt atoms migrate to the nanoparticle surface, forming a cobalt oxide epitaxial film, like water on oil,” says Haimei Zheng, a staff scientist in Berkeley Lab’s Materials Sciences Division who led this study. “During the hydrogen reduction reaction, cobalt atoms migrate back into the bulk, leaving a monolayer of platinum on the surface. This atomic information provides an important reference point for designing and engineering better bimetallic catalysts in the future.”

TEM image of platinum/cobalt bimetallic nanoparticle catalyst in action shows that during the oxidation reaction, cobalt atoms migrate to the surface of the particle, forming a cobalt oxide epitaxial film, like water on oil. Image credit: Berkeley Lab (Click image to enlarge)

Zheng, a 2011 recipient of a DOE Office of Science Early Career Award, is the corresponding author of a paper describing this research in the journal NANO Letters entitled “Revealing the Atomic Restructuring of Pt-Co Nanoparticles.” Co-authors at Berkeley are Huolin Xin, Selim Alayoglu, Runzhe Tao, Lin-Wang Wang, Miquel Salmeron and Gabor Somorjai. Other co-authors are Chong-Min Wang and Libor Kovarik, of the Pacific Northwest National Laboratory (PNNL), Eric Stach of Brookhaven National Laboratory (BNL), and Arda Genc of the FEI Company in Oregon.

Bimetallic catalysts are drawing considerable attention from the chemical industry these days because in many cases they offer superior performances to their monometallic counterparts. There is also the possibility of tuning their catalytic performances to meet specific needs. A bimetallic catalyst of particular interest entails the pairing of platinum, the gold standard of monometallic catalysts, with cobalt, a lesser catalyst but one that is dramatically cheaper than platinum. The platinum/cobalt catalyst is not only considered a model system for the study of other bimetallic nanocatalysts, it is also an excellent promoter of the widely used Fischer-Tropsch process, in which mixtures of hydrogen and carbon monoxide are converted into long-chain carbons for use as fuels or in low-temperature fuel cells. 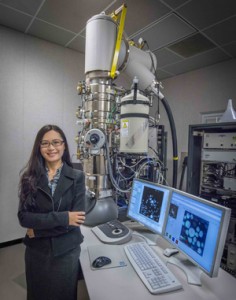 Haimei Zheng is a staff scientist in Berkeley Lab’s Materials Sciences Division and a 2011 recipient of a DOE Office of Science Early Career Award. (Photo by Roy Kaltschmidt)

“While there have been many studies on platinum/cobalt and other bimetallic catalysts, information on how reactions proceed atomically and what the morphology looks like has been missing,” Zheng says. “To acquire this information it was necessary to map the atomic structures in reactive environments in situ, which we did using specially equipped TEMs.”

The in situ environmental TEM experiments were carried out at both the Environmental Molecular Sciences Laboratory, which is located at PNNL, and at BNL’s Center for Functional Nanomaterials. Ex situ aberration-corrected TEM imaging was done at Berkeley Lab’s National Center for Electron Microscopy using TEAM 0.5, the world’s most powerful TEM.

“This work is an excellent example of collaborative team-work among multiple institutes,” Zheng says. “Having access to such high-end resources and being able to form such close team collaborations strengthens our ability to tackle challenging scientific problems.”

“By taking this segregation of the platinum and cobalt atoms into consideration, the interfacial strain that arises during oxidation can be predicted,” Zheng says. “We can then design nanoparticle catalysts to ensure that during reactions the material with higher catalytic performance will be on surface of the nanoparticles.”

Zheng adds that the ability to observe atomic scale details of the evolution of the structure of nanoparticles in their reactive environments not only opens the way to a deeper understanding of bimetallic nanoparticle catalysis, it also allows for the study of a wider variety of nanoparticle systems where reaction pathways remain elusive.