Washington, D.C.— Reconstructing the rise of life during the period of Earth’s history when it first evolved is challenging. Earth’s oldest sedimentary rocks are not only rare, but also almost always altered by hydrothermal and tectonic activity. A new study from a team including Carnegie’s Nora Noffke, a visiting investigator, and Robert Hazen revealed the well-preserved remnants of a complex ecosystem in a nearly 3.5 billion-year-old sedimentary rock sequence in Australia. Their work is published in Astrobiology.

The Pilbara district of Western Australia constitutes one of the famous geological regions that allow insight into the early evolution of life. Mound-like deposits created by ancient photosynthetic bacteria, called stromatolites, and microfossils of bacteria have been described by scientists in detail. However, a phenomenon called microbially induced sedimentary structures, or MISS, had not previously been seen in this region. These structures are formed from mats of microbial material, much like mats seen today on stagnant waters or in coastal flats.

The team included Noffke, Hazen, Daniel Christian of Old Dominion University, and David Wacey of the University of Western Australia. They described various MISS preserved in the region’s Dresser Formation. Advanced chemical analyses point toward a biological origin of the material. 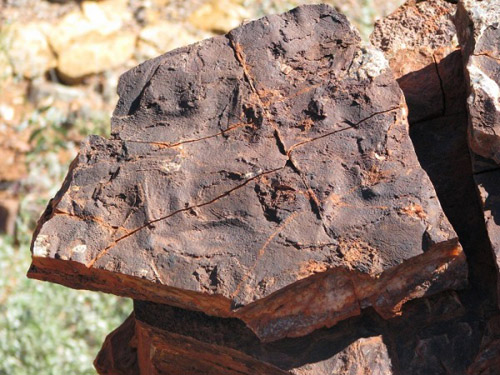 The Dresser MISS fossils resemble strongly in form and preservation the MISS from several other younger rock samples, such as a 2.9 billion-year-old ecosystem Noffke and her colleagues found in South Africa.

The team proposes that the sedimentary structures arose from the interactions of bacterial films with shoreline sediments from the region.

“The structures give a very clear signal on what the ancient conditions were, and what the bacteria composing the biofilms were able to do,” Noffke said.

MISS are among the targets of Mars rovers, which search for similar formations on that planet’s surface. Thus, the team’s findings could have relevance for studies of our larger Solar System as well.