Activities over the weekend included use of Curiosity’s robotic arm to deliver portions of powdered rock to a laboratory inside the rover. The powder has been stored in the arm since the rover collected it by drilling into the target rock “Cumberland” six months ago. Several portions of the powder have already been analyzed. The laboratory has flexibility for examining duplicate samples in different ways.

The decision to resume science activities resulted from the success of work to diagnose the likely root cause of a Nov. 17 change in voltage on the vehicle. The voltage change itself did not affect the rover safety or health. The vehicle’s electrical system has a “floating bus” design feature to tolerate a range of voltage differences between the vehicle’s chassis — its mechanical frame — and the 32-volt power lines that deliver electricity throughout the rover. This protects the rover from electrical shorts.

“We made a list of potential causes, and then determined which we could cross off the list, one by one,” said rover electrical engineer Rob Zimmerman of NASA’s Jet Propulsion Laboratory, Pasadena, Calif. Science operations were suspended for six days while this analysis took priority. 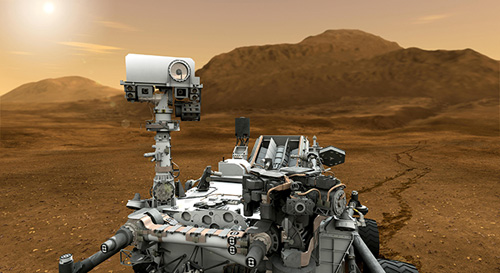 The likely cause is an internal short in Curiosity’s power source, the Multi-Mission Radioisotope Thermoelectric Generator. Due to resiliency in design, this short does not affect operation of the power source or the rover. Similar generators on other spacecraft, including NASA’s Cassini at Saturn, have experienced shorts with no loss of capability. Testing of another Multi-Mission Radioisotope Thermoelectric Generator over many years found no loss of capability in the presence of these types of internal shorts.

Following the decision to resume science activities, engineers learned early Nov. 23 that the rover had returned to its pre-Nov. 17 voltage level. This reversal is consistent with their diagnosis of an internal short in the generator on Nov. 17, and the voltage could change again.

The analysis work to determine the cause of the voltage change gained an advantage from an automated response by the rover’s onboard software when it detected the voltage change on Nov. 17. The rover stepped up the rate at which it recorded electrical variables, to eight times per second from the usual once per minute, and transmitted that engineering data in its next communication with Earth. “That data was quite helpful,” Zimmerman said.

In subsequent days, the rover performed diagnostic activities commanded by the team, such as powering on some backup hardware to rule out the possibility of short circuits in certain sensors.

NASA’s Mars Science Laboratory Project is using Curiosity inside Gale Crater to assess ancient habitable environments and major changes in Martian environmental conditions. JPL, a division of the California Institute of Technology in Pasadena, built the rover and manages the project for NASA’s Science Mission Directorate in Washington.