Enduring two typhoons over a three-week period in August, Woods Hole Oceanographic Institution (WHOI) researchers, working in partnership with the Okinawa Institute of Science and Technology Graduate University (OIST), have successfully deployed an OceanCube Observatory System in waters off Motobu Peninsula, Japan — a biodiversity hotspot that is home to ecologically significant coral reefs. The observatory system enables real-time monitoring of temperature, salinity, and other chemical, biological and physical data critical to understanding the health of and changes in the coral reef ecosystem.

Okinawa is situated at the northernmost end of the border between the Pacific and the Indian Oceans. The coral reefs there support the highest diversity of endemic species, plants and animals in the world. These coral reefs are also economically valuable, generating as much as 3 trillion yen ($30 billion) globally, and 250 billion yen ($2.5 billion) in Japan.

Long-term, uninterrupted data collection and observations from coral reefs are essential to understanding the changes these ecosystems are undergoing.  “The extensive coral reefs and diverse fish communities in this area will provide a fantastic backdrop to study the impacts of climate change and ocean acidification,” said Dr. Scott Gallager, WHOI Associate Scientist and principal investigator on the project. 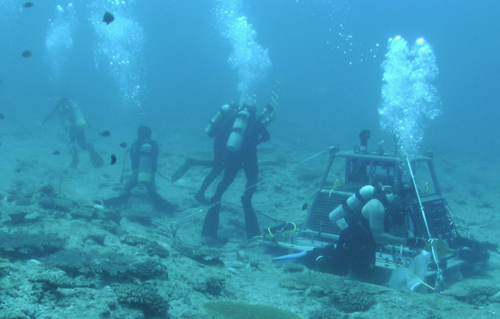 OceanCube Observatories are developed by WHOI engineers, biologists, and chemists who have a vision of observing pieces of the ocean at a very high resolution at a reasonable cost in order to answer scientific questions that previously could not be answered.

“We designed the OceanCube observatories specifically to understand changes in species, nutrients, and energy through a control volume of water. Comparing sites allows us to decouple changes due to natural and human causes,” added Gallager.

The OceanCube is so called because the observatory monitors a controlled cube-shaped volume of water in the ocean about 100 meters on a side – approximately 200,000 cubic meters in volume. The heart of the cube is a central node at 22 meters depth and 3 kilometers offshore, housing a variety of biological, physical, and chemical sensors to measure the flux of material (plankton, carbon, energy) within the cube. The edges of the cube are established by temperature and current sensors (Acoustic Doppler Current Profiler) at each corner. High-resolution machine vision cameras capture images of zooplankton and other underwater scenes and stereo images of fish communities, providing an accurate picture of environmental impact on coral reefs. Real-time data recorded by the system are sent via an underwater fiber-optic cable to scientists who can access them remotely. The scientists will use the data to analyze the patterns of ocean circulation and connectivity among coral inhabitants.

High-resolution machine vision cameras capture images of zooplankton and other underwater scenes and stereo images, like the turtle above, of fish communities, providing a picture of environmental impact on coral reefs. (Photo courtesy of OIST)

Gallager’s team is currently funded to construct and install another OceanCube on Oshima Island just 110 km south of Tokyo. “Since both the OIST and Oshima Cubes are directly in the path of the Kuroshio Current, we will be able to observe transport of carbon and quantify the evolution of the plankton community during the 1000 km transit between sites,” said Gallager.

The OIST OceanCube is the second such system the WHOI team has installed; the first was in Panama at the Liquid Jungle Lab (LJL), a remote marine lab in the Pacific used by an international group of scientists and students for multidisciplinary research.

“When we installed the cabled observatory 2km off the Liquid Jungle Lab in January 2006 we did not know what to expect. Within a few days we realized we were seeing huge internal waves with water temperatures oscillating between 10 and 30 degrees centigrade within 10 minutes,” recalled Amber York, a research associate on Gallager’s team. “How do benthic organisms handle such a large thermal change? What communities of fish and plankton are associated with surface versus deep, upwelled water? How does the rapid influx of new nutrients influence algal blooms typically associated with the end the dry season? These are just a few of the questions that we are addressing with the Panama observatory at LJL.” 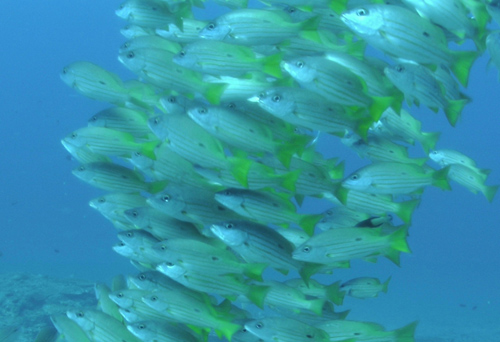 The OceanCube off Okinawa is located in a biodiversity hotspot that is home to ecologically significant coral reefs and reef fishes. The OIST observatory’s pan and tilt webcam captured this image of a school of dory snapper (Lutjanus fulviflamma) as it swam by. Machine vision tools are being developed to track and identify fish in these images. (Photo courtesy of OIST)

Another proposed site is on the Caribbean side of the Panamanian Isthmus near the Smithsonian Tropical Research Station at Bocas de Toro. Comparing the Bocas de Toro site, which is non-upwelling, with the strongly upwelling LJL site will provide a natural experiment to test the hypothesis that organisms exposed to corrosive (low pH) upwelled water have developed physiological adaptations allowing them to grow and reproduce under conditions we would expect to see 50 years from now throughout the world ocean. 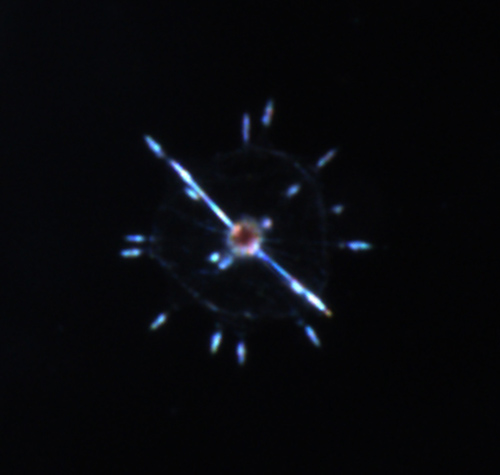 An image of a microscopic Acantharian, which makes its skeleton from celestite (strontium sulfate), taken by OceanCube’s CPICS (Continuous Plankton Imaging and Classification System) plankton camera. The actual size of this protozoan is about 0.05 mm or 50 microns. (Photo courtesy of OIST)

The Okinawa Institute of Science and Technology Graduate University (OIST) worked in agreement with the Okinawa General Bureau’s Ocean Expo Park to install the OceanCube marine observatory system in waters off the coast of the Ocean Expo Park in Motobu Peninsula, where the Churaumi Aquarium is located. The establishment of this world-class oceanographic monitoring system in Okinawa with WHOI as a partner will help OIST advance its marine scientific research capability towards becoming an international center of marine science.