AUSTIN, Texas — Researchers at the Cockrell School of Engineering at The University of Texas at Austin have built the smallest, fastest and longest-running tiny synthetic motor to date. The team’s nanomotor is an important step toward developing miniature machines that could one day move through the body to administer insulin for diabetics when needed, or target and treat cancer cells without harming good cells.

With the goal of powering these yet-to-be invented devices, UT Austin engineers focused on building a reliable, ultra-high-speed nanomotor that can convert electrical energy into mechanical motion on a scale 500 times smaller than a grain of salt. 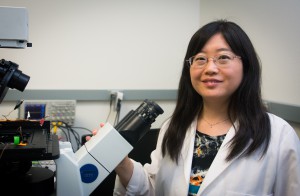 Mechanical engineering assistant professor Donglei “Emma” Fan led a team of researchers in the successful design, assembly and testing of a high-performing nanomotor in a nonbiological setting. The team’s three-part nanomotor can rapidly mix and pump biochemicals and move through liquids, which is important for future applications. The team’s study was published in the April issue of Nature Communications.

Fan and her team are the first to achieve the extremely difficult goal of designing a nanomotor with large driving power.

With all its dimensions under 1 micrometer in size, the nanomotor could fit inside a human cell and is capable of rotating for 15 continuous hours at a speed of 18,000 RPMs, the speed of a motor in a jet airplane engine. Comparable nanomotors run significantly more slowly, from 14 RPMs to 500 RPMs, and have only rotated for a few seconds up to a few minutes.

Looking forward, nanomotors could advance the field of nanoelectromechanical systems (NEMS), an area focused on developing miniature machines that are more energy efficient and less expensive to produce. In the near future, the Cockrell School researchers believe their nanomotors could provide a new approach to controlled biochemical drug delivery to live cells.

To test its ability to release drugs, the researchers coated the nanomotor’s surface with biochemicals and initiated spinning. They found that the faster the nanomotor rotated, the faster it released the drugs.

“We were able to establish and control the molecule release rate by mechanical rotation, which means our nanomotor is the first of its kind for controlling the release of drugs from the surface of nanoparticles,” Fan said. “We believe it will help advance the study of drug delivery and cell-to-cell communications.”

The researchers address two major issues for nanomotors so far: assembly and controls. The team built and operated the nanomotor using a patent-pending technique that Fan invented while studying at Johns Hopkins University. The technique relies on AC and DC electric fields to assemble the nanomotor’s parts one by one.

Fan and her team plan to develop new mechanical controls and chemical sensing that can be integrated into nanoelectromechanical devices. But first they plan to test their nanomotors near a live cell, which will allow Fan to measure how they deliver molecules in a controlled fashion.

All UT investigators involved with this research have filed their required financial disclosure forms with the university. Kwanoh Kim, Xiaobin Xu and Jianhe Guo have not received any funding for any other study or work outside of university appointments during the past 12 months. Donglei “Emma” Fan has worked on projects sponsored by the Welch Foundation and government agencies including the National Science Foundation and the National Institutes of Health.