A team of archaeologists led by Stephen Houston has made a new discovery at the Maya archaeological site in El Zotz, Guatemala, uncovering a pyramid believed to celebrate the Maya sun god. The structure’s outer walls depict the god in an unprecedented set of images done in painted stucco. In 2010, the team uncovered a royal tomb filled with artifacts and human remains at the same site. Researchers believe the pyramid was built to link the deceased lord to the eternal sun.

PROVIDENCE, R.I. [Brown University] — A team of archaeologists led by Brown University’s Stephen Houston has uncovered a pyramid, part of the Maya archaeological site at El Zotz, Guatemala. The ornately decorated structure is topped by a temple covered in a series of masks depicting different phases of the sun, as well as deeply modeled and vibrantly painted stucco throughout.

The team began uncovering the temple, called the Temple of the Night Sun, in 2009. Dating to about 350 to 400 A.D., the temple sits just behind the previously discovered royal tomb, atop the Diablo Pyramid. The structure was likely built after the tomb to venerate the leader buried there.

Houston says that through this find, much of it pristinely preserved, researchers are gaining a significant amount of new information about the Maya civilization.

“The Diablo Pyramid is one of the most ambitiously decorated buildings in ancient America,” Houston says. “The stuccos provide unprecedented insight into how the Maya conceived of the heavens, how they thought of the sun, and how the sun itself would have been grafted onto the identity of kings and the dynasties that would follow them.”

This latest discovery was made public earlier today during a press conference in Guatemala City, hosted by the Instituto de Antropologia e Historia de Guatemala, which authorized the work. 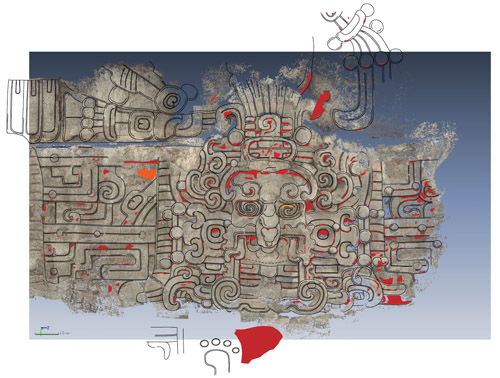 Diablo Pyramid, north side. A tracing of an image found at the El Zotz archaeological site in Guatemala depicts the Maya sun god. “The stuccos provide unprecedented insight into how the Maya conceived of the heavens,” said archaeologist Stephen Houston, “how they thought of the sun, and how the sun itself would have been grafted onto the identity of kings and the dynasties that would follow them.” Image credit: Stephen Houston

Houston says the team is still in the beginning stages of the temple’s excavation, with more than 70 percent still to be uncovered. The Maya later built additional levels on top of the original structure, which helped to preserve the stuccos, but this also makes excavation more difficult. While excavating the tomb in 2009, Houston and his team discovered a small portion of the carvings peeking out from looter’s tunnels that had been dug several decades earlier. The archaeologists have only been able to clear narrow tunnels around the building to get a look at the masks and other carvings. There are several sections, including whole sides, an area of the roof, and the base still to be excavated.

To get a better idea of what the building would have looked like in its original form, Houston is working with a team from the Center for Advanced Spatial Technologies (CAST) at the University of Arkansas, which uses photogrammetric techniques to create 3-D images of the stuccos. Houston is using those images, as well as hundreds of color photographs taken during the excavation, to create drawings of the building.

Renderings indicate that a large solid platform made up the base of the pyramid, which consisted of two or three narrower terraces with the temple sitting at the top. The previously discovered tomb sits just beneath the main platform. A sanctuary was eventually built on top of the tomb to offer protection to the space. Houston says that at one time most of the temple would have been covered in ornate stuccos and that it is possible much of it has survived.

The excavation of the El Zotz site became more important last year, when it was named one of the World Monuments Fund’s 67 international cultural heritage sites at risk. The site is known for one of the very few carved wooden lintels with hieroglyphic text to have survived from pre-Colombian Mesoamerica.

The team is learning much more about the temple’s purpose. Sitting on a high escarpment overlooking the main part of El Zotz, an ancient Maya city, the pyramid would have been a spectacular presence 1,600 years ago, according to Houston. Painted a saturated red, the temple was intended to announce its presence and the power of the ruling dynasty. It would have been at its brightest during the rising and setting of the sun and visible up to 15 miles away. 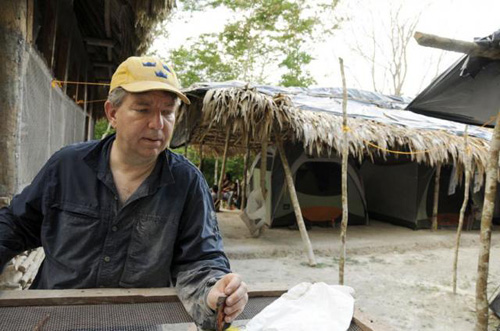 Stephen Houston. “(The sun) was an icon which they linked very deliberately to royal lines, royal identity, and royal power. It’s the most dominant celestial feature. It’s something that rises every day and penetrates into all nooks and crannies, just as royal power presumably would.” Image credit: Arturo Godoy

The stucco masks on the walls of the temple appear to depict several celestial beings, including the sun, which the Maya thought of as a god (“K’inich Ajaw”). Standing 5 feet tall, several of the masks illustrate different phases of the sun as it moves from east to west in the sky over the course of the day. One mask displays fish-like characteristics, a representation of the rising sun on the horizon, which the Maya associated with the Caribbean to the east. Jeweled bands running between each mask contain archaic representations of Venus and other planets acting as the sky in this solar representation.

“The sun was a key element of Maya rulership,” Houston says. “It was an icon which they linked very deliberately to royal lines, royal identity, and royal power. It’s the most dominant celestial feature. It’s something that rises every day and penetrates into all nooks and crannies, just as royal power presumably would. This building is one that celebrates this close linkage between the king and this most powerful and dominant of celestial presences.”

The structure was built during a challenging time in the Maya world. The people of El Zotz and Tikal, another large Maya city nearby, were, for the first time, experiencing contact with and intrusions from the people of Teotihuacan, ancient America’s largest metropolis located near modern-day Mexico City. The pyramid may have been erected to signal local power at a time of intrusion and political turbulence.

Another finding indicates that the Maya saw the building as a living being rather than just simply a physical structure. At one point, possibly when the Maya were preparing to add new construction to the existing building, the nose and mouths of the masks, as well as identifying glyphs on the forehead diadems, were systematically mutilated, according to Houston, as a way to deactivate the building.

Despite the obvious care that was taken in constructing the building, it wasn’t used for long. Houston says evidence at the site shows that the building was abandoned sometime in the A.D. 400s, possibly because of a break in the dynastic order.

Houston, a 2008 MacArthur fellow, is the Dupee Family Professor of Social Science and professor of anthropology at Brown.

Houston’s co-director of the site has been Edwin Román, a Ph.D. candidate at the Long Institute of Latin American Studies at the University of Texas–Austin. They are working with a group of Brown graduate students and researchers, including Thomas Garrison, a former postdoctoral fellow at the Joukowsky Institute and the Department of Anthropology and currently on staff at the University of Southern California, and Sarah Newman, Nicholas Carter, Yeny Gutiérrez, and Boris Beltrán. Photography was done by Arturo Godoy and Alexa Rubinstein.

Fieldwork in 2012 was directed by Edwin Román and Thomas Garrison, with Houston as scientific adviser.

The work at El Zotz has been supported by funding from the National Science Foundation, the National Endowment for the Humanities, private sources, and, for the 2012 field season, by PACUNAM, a Guatemalan charity.