Pine Island Glacier is one of the biggest routes for ice to flow from Antarctica into the sea. The floating ice shelf at the glacier’s tip has been melting and thinning for the past four decades, causing the glacier to speed up and discharge more ice.

Understanding this ice shelf is a key for predicting sea-level rise in a warming world. A paper published Jan. 2 in the advance online version of the journal Science shows that the ice shelf melting depends on the local wind direction, which is tied to tropical changes associated with El Niño.

The study, led by author Pierre Dutrieux at the British Antarctic Survey, uses new data to show how winds and topography control how much warm water reaches the ice shelf. University of Washington co-authors provided atmospheric modeling expertise to help interpret the observations and show how they are related to climate conditions in the tropical Pacific Ocean.

“These new results show that how much melt the Antarctic ice sheet experiences can be highly dependent on climatic conditions occurring elsewhere on the planet,” said co-author Eric Steig, a UW professor of Earth and space sciences. 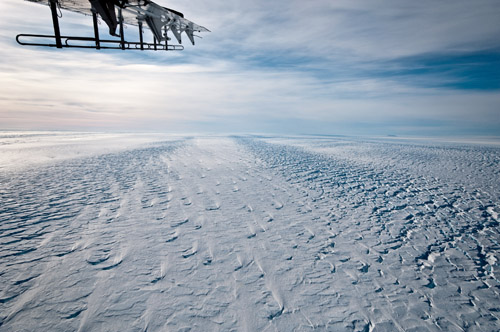 The Pine Island ice shelf in 2009. This photo was taken near the grounding line, where the land-based glacier transitions to a floating ice shelf. Image credit: Ian Joughin, UW

The Pine Island ice shelf has thinned nearly continuously since observations began in the 1970s. Earlier studies have shown that warm deep-ocean water is melting the ice shelf from below, suggesting that warming global oceans are gradually targeting the underside of the ice sheet.  But the picture is more complex, say authors of the new study.  The deep ocean has been getting warmer but, more importantly, more warm water has been reaching the ice shelf.

Under the right conditions, the warm deep water that surrounds Antarctic can flood the continental shelf and make its way to the glacier margin. Measurements during the last two decades have shown the persistent presence of a thick layer of warm water on the continental shelf, in contact with the Pine Island ice shelf.

In January 2012, British Antarctic Survey researchers and colleagues from Germany and Korea revisited the area to gather more data. They found the layer of warm water was much thinner than before and was topped by a thicker-than-usual layer of cold water that surrounded, and thus protected, the ice shelf. They estimated half as much meltwater was being produced from the glacier compared to 2010, making summer 2012 the lowest melting of the Pine Island Glacier on record.

Detailed measurements of water temperature, combined with a computer model of ocean circulation, shows that the reduced melting in 2012 was because less warm, deep water was able to make it across an underwater ridge that separates Pine Island Glacier from the Southern Ocean.  Reduced flow across the ridge can be explained by a change in winds, which were persistently easterly for most of the preceding year, researchers noted. Winds in this region are normally westerly.

This raises the question of why the winds were different in 2011 and early 2012 than in previous years. Steig was co-author of a 2011 study in Nature Geoscience, led by UW postdoctoral research Qinghua Ding, that showed that winds in the Pine Island Glacier area are related to changes in the tropical Pacific tied to El Niño events. In 2012 Steig and Ding published a paper with UW atmospheric scientist David Battisti and co-author Adrian Jenkins of the British Antarctic Survey that linked the Pine Island Glacier melting to the tropical Pacific.

The new study provides the observations to back up the UW authors’ theoretical work.

“We had thought that the wind variability played an interesting, but relatively small role, but the new data supports our idea and shows that it has a strong effect,” Steig said. “The wind field in late 2011 and early 2012 had changed dramatically compared to previous years – the dominant westerly winds in the surrounding area were easterly almost all through late 2011 and early 2012, and those changes were related to the very large 2011 La Niña event.”

In 2012, the El Niño tropical system switched to a La Niña, reversing the local winds in this region of Antarctica and causing less warm water to flow into the area.

If the conditions observed in 2012 were to continue, the authors write, it would have profound implications for the Pine Island ice shelf. Continuation of this thick layer of cold surface water would reverse the current thinning trend, potentially allowing the glacier edge to rebuild. It is not likely, however, that such conditions will persist.

“2012 was probably just a rare event,” said Steig, “and I expect that a return visit to Pine Island area would find conditions much more similar to those observed in earlier years.”