Eddies Found to be Deep, Powerful Modes of Ocean Transport

*Study Finds Connection between Atmospheric Events and the Deep Ocean*

Researchers from Woods Hole Oceanographic Institution (WHOI) and their colleagues have discovered that massive, swirling ocean eddies–known to be up to 500 kilometers across at the surface–can reach all the way to the ocean bottom at mid-ocean ridges, some 2,500 meters deep, transporting tiny sea creatures, chemicals, and heat from hydrothermal vents over large distances.

The previously unknown deep-sea phenomenon, reported in the April 28 issue of the journal Science, helps explain how some larvae travel huge distances from one vent area to another, said Diane K. Adams, lead author at WHOI and now at the National Institutes of Health.

“We knew these eddies existed,” said Adams, a biologist. “But nobody realized they can affect processes on the bottom of the ocean. Previous studies had looked at the upper ocean.”

Using deep-sea moorings, current meters and sediment traps over a six-month period, along with computer models, Adams and her colleagues studied the eddies at the underwater mountain range known as the East Pacific Rise. That site experienced a well-documented eruption in 2006 that led to a discovery reported last year that larvae from as far away as 350 km somehow traveled that distance to settle in the aftermath of the eruption. 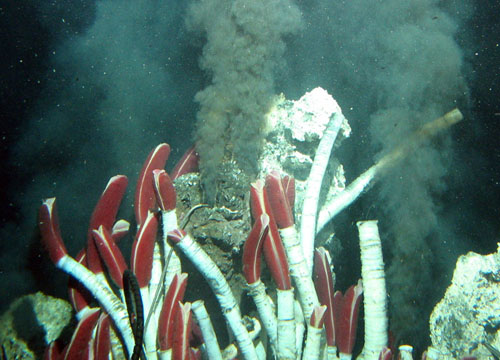 The newly discovered depth of the powerful eddies helps explain that phenomenon but also opens up a host of other scientific possibilities in oceans around the world. “This atmospherically generated mechanism is affecting the deep sea and how larvae, chemical and heat are transported over large distances,” Adams said.

The eddies are generated at the surface by atmospheric events, such as wind jets, which can be strengthened during an El Niño, and “are known to have a strong influence on surface ocean dynamics and production,” say Adams and Dennis J. McGillicuddy from WHOI, along with colleagues from Florida State University, Lamont Doherty Earth Observatory, and the University of Brest in France. But this “atmospheric forcing…is typically not considered in studies of the deep sea,” they report.

Moreover, the eddies appear to form seasonally, suggesting repeated interactions with undersea ridges such as the Eastern Pacific Rise. The models “predict a train of eddies across the ocean,” Adams said. “There may be two to three eddies per year at this location,” Adams said. Each one, she says, “could connect the site of the eruption to other sites hundreds of miles away.” Elsewhere, she adds, “there are numerous places around the globe where they could be interacting with the deep sea.” 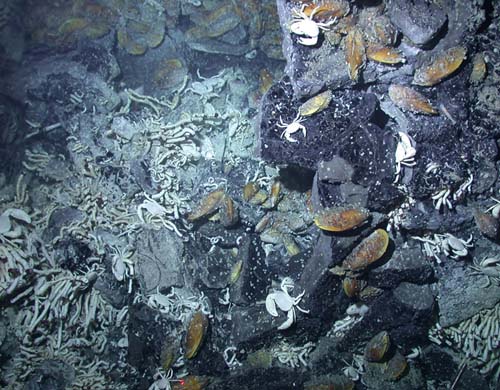 In her 2010 report on larvae traveling great distances to settle at the eruption site, WHOI Senior Scientist Lauren S. Mullineaux , along with Adams and others, suggested the larvae traveled along something like an undersea superhighway, ocean-bottom “jets” travelling up to 10 centimeters a second. But conceding that even those would not be enough to carry the larvae all that distance in such a short time, the researchers speculated that large eddies may be propelling the migrating larvae even faster.

Adams’s current work follows up on that possibility. “The mechanism we found helps explain what we saw in the first paper,” Adams said.

It is the larger picture, over longer periods of time, however, that Adams and her colleagues find particularly intriguing. “Transport [of ocean products] could occur wherever…eddies interact with ridges—including the Mid-Atlantic Ridge, the Southwest Indian Ridge, and the East Scotia Ridge—and the surrounding deep ocean,” the researchers say. 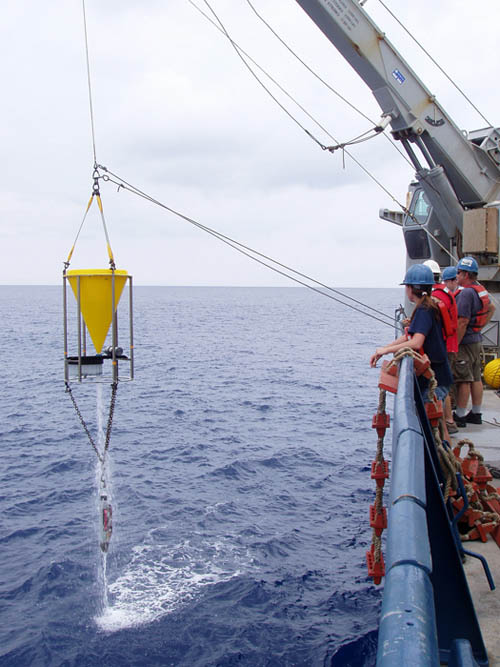 The lead author, Diane K Adams (foreground), helps the crew of the R/V Atlantis haul in one of the moorings equipped with current meters and a time series sediment trap (shown here) whose contents revealed the unexpected influence of eddies on the transport of hydrothermal vent chemicals and biology. Image credit: B Govenar, Woods Hole Oceanographic Institution

And because the eddies appear to form repeatedly, the high-speed, long-distance transport can last for months. “Although the deep sea and hydrothermal vents in particular are often naively thought of as being isolated from the surface ocean and atmosphere, the interaction of the surface-generated eddies with the deep sea offers a conduit for seasonality and longer-period atmospheric phenomena to influence the ‘seasonless’ deep sea,” Adams and her colleagues write.

“Thus, although hydrothermal sources of heat, chemical and larval fluxes do not exhibit seasonality there is potential for long-distance transport and dispersal to have seasonal to interannual variability.”

The study was funded by the National Science Foundation, WHOI, and the U.S. Department of Defense.