A team of scholars who are engaged in researching ways to improve human capital and economic opportunity convened the “Conference on the Study of Inequality” on Monday, June 17, at the University of Chicago Center in Beijing.

The conference, which was co-sponsored by the Human Capital and Economic Opportunity Global Working Group, the University of Chicago Center in Beijing and the China Center for Economic Research at Peking University, kicked off a week of events.

“We are committed to this study in China and have brought together foremost scholars and students to train in the best measurement techniques and to help both Western and China-based scholars improve research on inequality,” said James Heckman, the Henry Schultz Distinguished Service Professor of Economics and Director of the Economics Research Center and the Center for Social Program Evaluation at the Chicago Harris School of Public Policy.

Heckman opened the conference with welcoming remarks and introduced the six HCEO networks and their goals. 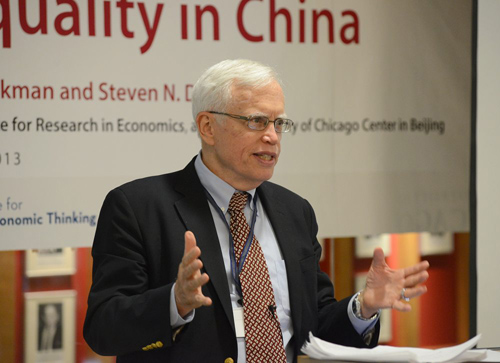 Professor James Heckman, the Henry Schultz Distinguished Service Professor of Economics, stresses the importance of tackling the issues of inequality from a broad perspective, as he introduces the roles of the six networks that comprise the Human Capital and Economic Opportunity Global Working Group. Photo by James Withrow

“The Human Capital and Economic Opportunity Global Working Group is dedicated to enhancing research and improving methodology across all fields related to the study of inequality,” said Heckman.

“Inequality is an extremely broad topic, and HCEO’s approach is to foster an understanding of inequality from a broader perspective,” he said. “For example, the family inequality network examines the role of the family in producing inequality or creating opportunities for children. The health network has geneticists working with economists, the early childhood interventions network has brought in developmental psychologists and practitioners, and the like.” 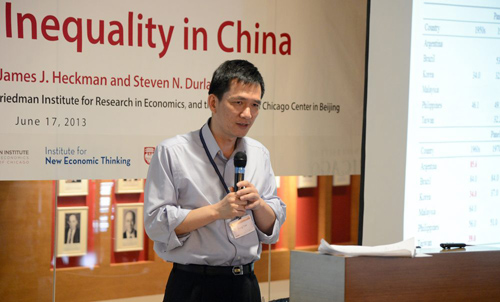 Yang Yao, professor and director of the China Center for Economic Research at Peking University, gave the keynote address at a June 17 conference at the University of Chicago Center in Beijing. Photo by James Withrow

Professor and director of the China Center for Economic Research at Peking University, Yang Yao, summarized the current state of China’s inequality in his keynote presentation in Beijing, noting, “Education is the most important channel” and investing in early childhood education is critical. Yang emphasized that China’s most valuable resource is its people. “Investing in people is more worthwhile than investing in roads.”

The conference also kicked off HCEO’s weeklong Beijing Summer School of Socio-Economic Inequality in China, which was designed to provide state-of-the-art overviews of different aspects of the study of inequality with a specific focus on China.

“Our intention is to provide an intensive one-week experience that teaches the tools needed to study inequality and communicates a sense of the research frontier in understanding inequality,” said Steven Durlauf, the Vilas Research Professor and Kenneth J. Arrow Professor of Economics at the University of Wisconsin at Madison. 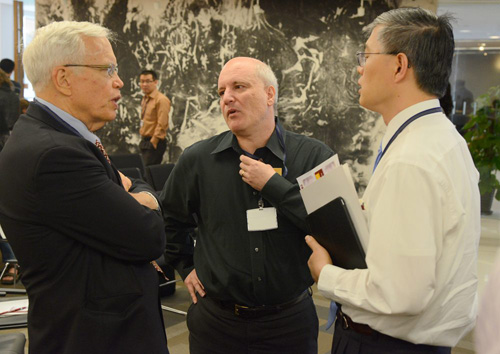 Professors James Heckman (left to right), Steven Durlauf and Dali Yang talk during a break in the Conference on the Study of Inequality. Photo by James Withrow

Following the events in Beijing, Durlauf joined other scholars this month in Chicago, including Heckman and Scott Kominers, a postdoctoral research scholar at the Becker Friedman Institute for Research in Economics, to train graduate students in better measurement and assessment of inequality.