Echoes From an Exploding Star

*Astronomers watch a delayed broadcast of a powerful stellar eruption.*

Astronomers are watching the astronomical equivalent of streaming live video of a spectacular outburst from the unstable, behemoth double-star system Eta Carinae, which initially was seen on Earth nearly 170 years ago.

Dubbed the “Great Eruption,” the outburst lasted from 1837 to 1858 and caught the attention of sky-watchers at the time, including the British astronomer Sir John Herschel. He did not have the benefit of the imaging cameras and spectrographs that modern astronomers use to learn about stars, so we only have a historical record of the star’s visual brightness.

But luckily for today’s astronomers, some of the light from the eruption took an indirect path to Earth and is just arriving now. 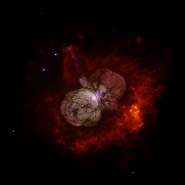 An image of Eta Carinae taken in visual light with the Hubble Space Telescope. (Photo: N. Smith/The University of Arizona)

The wayward light was heading in a different direction, away from our planet, until it bounced off dust lingering far from the turbulent stars and was rerouted to Earth, an effect called a “light echo.” Because of its longer path, the light reached Earth after a delay of 170 years, similar to the echo one hears when sound waves bounce of the walls in a canyon.

The observations provide new insight into the behavior of powerful massive stars on the brink of detonation. The views of the nearby erupting star reveal some unexpected results, which will force astronomers to modify physical models of the outburst.

“When the eruption was seen on Earth 170 years ago, there were no cameras capable of recording the event,” explained the study’s leader, Armin Rest of the Space Telescope Science Institute in Baltimore, Md.

“Everything astronomers have known to date about Eta Carinae’s outburst is from eyewitness accounts. Modern observations with scientific instruments were made years after light from the eruption reached Earth. It’s as if nature has left behind a surveillance tape of the event, which we are now just beginning to watch. We can trace it year by year to see how the outburst changed.”

The team’s paper is published in the Feb. 16 issue of the journal Nature.

Rest’s team first spotted the light echo while comparing visible-light observations he took of the star in 2010 and 2011 with the National Optical Astronomy Observatory’s CTIO Telescope at the Cerro Tololo Inter-American Observatory in Chile. He obtained another set of CTIO observations taken in 2003 by Nathan Smith, an assistant professor at the University of Arizona’s Steward Observatory, which helped him piece together the whole 20-year outburst.

“I’ve spent much of my career using tools like the Hubble Space Telescope to carefully dissect the expanding shrapnel left behind by the 19th century eruption of Eta Carinae, basically trying to perform stellar forensics on the violent event that was seen 170 years ago. I never thought I’d be lucky enough to see a replay of the event,” Smith said.

Located 8,000 light-years from Earth, Eta Carinae is one of the largest and brightest binary star systems in our Milky Way galaxy. Although the chaotic duo is known for its petulant outbursts, the Great Eruption was the most violent ever observed.

During the 20-year episode, Eta Carinae shed some 15 to 20 solar masses and became the second brightest star in the sky. Before the epic event, the stellar pair was 140 times heftier than our sun. 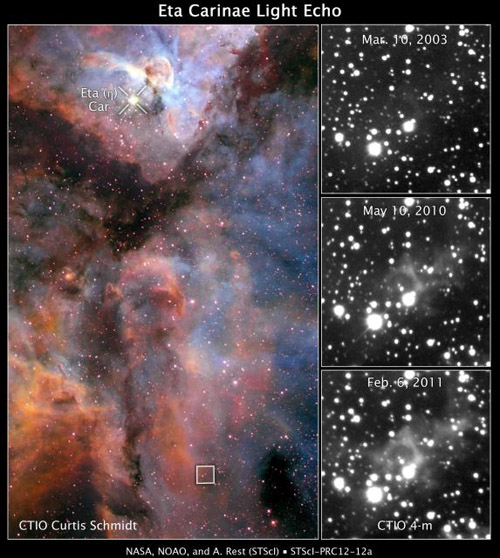 An eruption in the double star system Eta Carina 170 years ago sent light flashing across the vast canyons of interstellar dust. By pointing telescopes to an area far away from Eta Carinae (square insets), astronomers were able to watch light reflected on the dust like a giant screen. (Image credit: NASA/NOAO/A. Rest/N. Smith/The University of Arizona)

“Most of that ejected mass formed the system’s spectacular nebula, which is now expanding away from the star at more than 1 million miles per hour,” said Smith. “So far, analysis of that nebula seen in Hubble images has provided our best information about the eruption.”

Because Eta Carinae is relatively nearby, astronomers have used a variety of telescopes, including Hubble, to document its escapades. The team’s study involved a mix of visible-light and spectroscopic observations from ground-based telescopes.

The observations mark the first time astronomers have used spectroscopy to analyze a light echo from a star undergoing powerful recurring eruptions, though they have measured this unique phenomenon around exploding stars called supernovae. Spectroscopy captures a star’s “fingerprints,” providing details about its behavior, including the temperature, speed and chemical composition of the ejected material.

The delayed broadcast is giving astronomers a unique look at the outburst and turning up some surprises. The turbulent star does not behave like other stars of its class. Eta Carinae is a member of a stellar class called Luminous Blue Variables – large, extremely bright stars that are prone to periodic outbursts. The temperature of the outflow from Eta Carinae’s central region, for example, is about 8,500 degrees Fahrenheit (5,000 Kelvin), which is much cooler than that of other erupting stars.

“This star really seems to be an oddball,” Rest said. “Now we have to go back to the models and see what has to change to actually produce what we are measuring.”

The team followed up its study with spectroscopic observations, using the Carnegie Institution of Washington’s Magellan and du Pont telescopes at the Las Campanas Observatory in Chile. That study helped them decode the light and gave them information about the outburst.

The researchers compared the measurements of the brightness of these light echoes to the record of visual light output recorded by astronomers in the 1800s, which showed an erratic sequence of brightening and dimming over the course of the 20-year eruption. Their measurements of the brightening and dimming of the light echoes matched that of the 1843 peak in brightness.

“Being able to observe these echoes of the same light that reached Earth in the 19th century is a neat gift, allowing us to analyze the light from a historical event with modern astronomical telescopes,” said Smith. “Maybe it’s greedy, but next I’d like to see Eta Carinae explode for good as a bona fide supernova.”