echoecho: Solving the ‘Where Are You?’ Problem

*Startup makes meeting in the real world simple, safer and hassle-free with the help of Microsoft BizSpark.*

REDMOND, Wash. — Jan. 25, 2012 — “Where are you?” is one of the most ubiquitous phrases in text messages and phone calls. A number of location-based apps have tried to help mobile users address the question, but only Microsoft BizSpark startup echoecho has created an easy, intuitive solution that works anywhere in the world, using any leading smartphone. The mobile app helps users find their friends simply and easily, while helping protect their privacy as well as their device battery life — and without having to join yet another social network.

“More than 100 billion ‘Where are you?’ text messages are sent each year in the U.S. alone — and that doesn’t count texts in the rest of the world, or the number of times people say the phrase out loud during a phone call,” says Nick Bicanic, CEO and co-founder of echoecho. “Finding each other in the physical world turns out to be a really big problem, even more so with the GPS generation, and we are in business to find real solutions to real problems.”

Answering that common “Where are you?” question might seem trivial. But so-called social location mobile apps suffer from several serious inadequacies, which can compromise your privacy and identity while draining your phone battery and annoying your friends. The echoecho app launched in September 2011 overcomes these drawbacks. 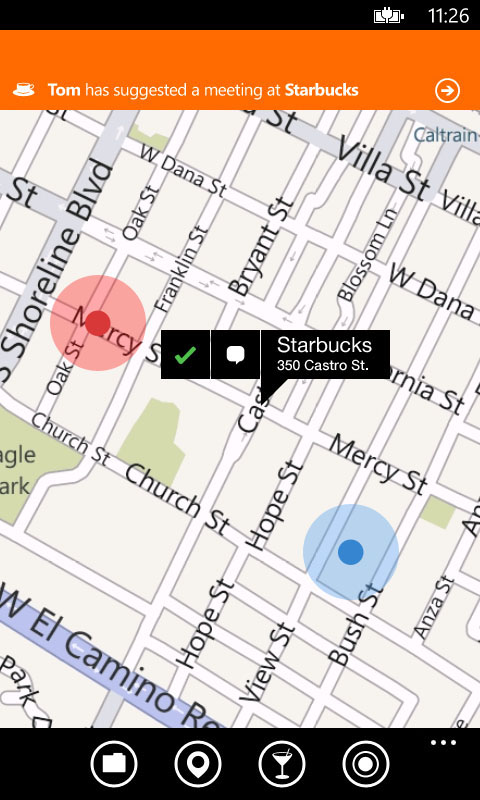 With echoecho you can arrange meeting places with two clicks. Image credit: Microsoft

“There are multiple check-in apps, and many more that share what you’re planning to do, and what your friends are planning to do, broadcasting location outward,” says Bicanic. “But the outcome of all of these technologies is ultimately you needing to find another person in the real world. We came at the problem from that direction, using a ‘pull’ rather than a ‘push’ approach, allowing you to ask ‘Where are you?’ and getting a quick answer. Other apps rely on your friend announcing ‘Here I am!’ to no one in particular, whenever they feel like it. In essence they can at best tell you where your friends were or will be not exactly where they are, right now.”

Broadcasting your location raises serious privacy concerns, even if you’re broadcasting only to an existing social network, and it could quickly drain your smartphone’s battery. Efforts to make broadcasting more selective usually involve setting up a new, specific social network.

“Other approaches consistently ignore the basics of privacy, permission and preference, which echoecho addresses directly,” says Bicanic. “And echoecho is designed around the social network already in your pocket: your address book.”

An echoecho connection takes only one or two clicks. You tap any name in your address book, and echoecho sends out a request to your friend, letting them know you’re looking for them. As soon as they approve, both parties see their locations on a map, as well as locations of nearby meeting places. You can even discuss plans in the EchoChat feature. Even if your friends don’t have echoecho installed, they will receive a text message form of a “Where are you?” question and they can reply and see the map without downloading the app. Everyone involved remains in control of what location information they share, as well as when and with whom they share it.

“Sometimes, people hearing about echoecho for the first time miss how we’re different, or why they might find our approach revolutionary,” says Bicanic. “But we think texting your location is like dancing with your phone number. How many times have we all found ourselves caught in endless loops of ‘I’m here, where are you?’ ‘I’m waiting for you, where are you?’ and so on. I overhear these conversations every day.”

Common scenarios where echoecho can be particularly useful include the following:

Getting a BizSpark Boost

The echoecho back end was built on Microsoft SQL Server 2008, and the app’s original application programming interface (API) was designed in Microsoft .NET. Still, echoecho had no plans to port its app to Windows Phone, due to doubts the platform could support the features needed. A conversation with a key BizSpark executive at a Silicon Valley event changed those assumptions and led to echoecho being invited to join BizSpark. 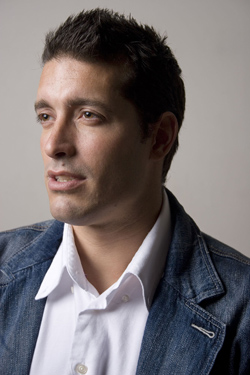 “After meeting with a few people in the extended BizSpark family, what I thought wasn’t possible turned out to be very possible in Windows Phone 7.5, ‘Mango,’” says Bicanic. “While I’ve always been a big admirer of Microsoft development tools, Microsoft isn’t known for its user interface elegance and beauty — but the new release is awesome and delivers a solid user experience. The BizSpark team was invaluable at helping us navigate Microsoft’s complex hierarchies to get quickly to the right people to answer our questions, and they provided insightful suggestions throughout the process.”

BizSpark also helped echoecho find a Windows Phone developer — not a Microsoft employee, but someone working externally — who was so skilled and such a good fit with echoecho’s culture that the company is working to hire him full time.

Although echoecho’s .NET foundation was extremely stable, with downloads in more than 170 countries and adoption increasing, Bicanic was concerned about strain under load. “We wanted additional stability and a performance boost capacity when necessary, which meant moving our .NET architecture to the cloud,” he says. “Luckily, before we chose a hosted server solution, we discovered Microsoft SQL Azure.”

Going From Talking to Turnkey in 60 Days

With more BizSpark facilitation, echoecho embarked on a migration to SQL Azure simultaneously with its client-side development. Thanks to the robust tools and rapid access to expert guidance in using them, echoecho completed its Windows Phone port in record time, along with migrating its service to Windows Azure.

“In less than two months of calendar time, we went from initial discussion to a full port and deployment of a Windows Phone app and a full deployment of live service on Windows Azure, including a database and applications,” says Bicanic. “Now that our entire echoecho service is on a super-scalable, multiple-redundancy, cloud-based system, we are confident that when massive usage spikes come, our service won’t stumble.”

While echoecho currently is focused on building its consumer-to-consumer (C2C) acceptance and credibility, the company will likely leverage its C2C success into business-to-consumer (B2C) solutions that it can monetize.

“Being able to deliver enhanced privacy, permission, preference and location has enormous potential to ease pain points in a number of markets, helping companies do things faster, easier or that were previously impossible,” says Bicanic.

For instance, instead of automatically blocking a person’s debit card when used in a different country, a bank could use echoecho to verify the identity of the debit card user, instantly and more securely. A mobile carrier or operating system maker could integrate echoecho into its offerings.

“When you’re as lean and small as echoecho, you don’t have the luxury of employing a bunch of specialists; everyone has to share the same vision, be multiskilled and wear many hats,” says Bicanic. He and echoecho co-founder Andrew Wanliss-Orlebar build on a decade of working together on diverse projects, including other technology startups and an award-winning documentary film. “We were able to massively accelerate our development at echoecho largely because Andrew and I are so in sync we often finish each other’s sentences, and we’re both able to flip seamlessly between creative, technical and commercial perspectives.”

From Social Location to Societal Impact

This complementarity extends to the co-founders’ longer-term plans for echoecho, as well. “It goes well beyond helping people work out where to meet for a drink in a big city,” says Wanliss-Orlebar.

Adds Bicanic: “For instance, in developing countries people don’t care about becoming ‘mayor’ of their local coffee shop. They need to find buyers for their goods, potable water or the guy selling mobile phone airtime a street corner away. Worldwide, peer-to-peer commerce — designing a way for people to do transactions in person — is not facilitated by any existing location-based apps, but these are ideal opportunities for echoecho. In the end, it’s important to us as a company that we’re doing things right, and that the problems we’re addressing aren’t frivolous.”

“I believe that everyone’s just scratching the surface of what you can do with location,” says Bicanic. “People are extremely uncomfortable with anything they perceive to be Big Brother tracking-type solutions, so making people comfortable with sharing their location with their friends in relevant, simple ways will actually allow us to build things we haven’t even thought of yet.”