Studying the earbones of trout can reveal their lifetime movements in a large river system, according to a study released in the Canadian Journal of Fisheries and Aquatic Sciences.

Scientists correlated the natural variation in strontium isotopes found in stream waters against those recorded in otoliths (earbones) of westslope cutthroat trout to examine fish movements during their lifetime.

This study was the first to show that the use of isotopes in water and earbones accurately assesses movement of trout wholly within a freshwater system. The research was conducted by scientists from the U.S. Geological Survey’s Northern Rocky Mountain Science Center, Woods Hole Oceanographic Institution, Montana State University, and Montana Fish, Wildlife & Parks.

“It worked so well! The values in the water matched those in the otoliths, which grow like rings in a tree,” said Clint Muhlfeld, USGS scientist and lead author of the study. “As fish grow and move into new environments, the otoliths record that information and we matched that with stream statistics to reconstruct the entire life cycle of a fish.” 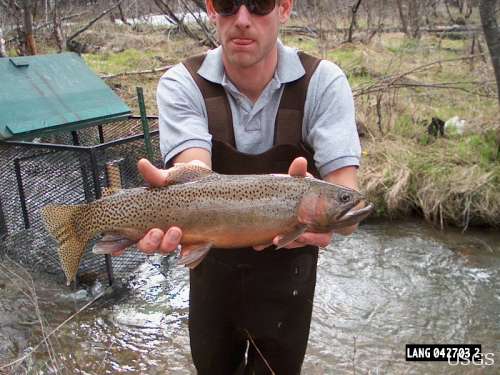 “All life is literally a product of its chemical environment, and there is no more dramatic demonstration of that fact than the ability to retrace the life history of fish from the variations in the chemicals deposited in their ear bones as they grow and migrate through space and time,” explained USGS Director Marcia McNutt. “As this technique has already proven its scientific value in understanding the movement of fish in the marine environment and those which migrate from freshwater streams to the ocean, it is truly an achievement that could inspire ‘CSI’.”

Westslope cutthroat trout are an important native fish species in western North America where their populations have declined because of factors including habitat destruction, fragmentation and non-native species. These fish make extensive migrations among spawning, growth and refuge habitats, yet conventional tracking techniques have not been able to unravel the extent of their movements. Knowing exactly what habitat the fish use during each life stage is an important component to understanding their ecology and, in turn, more effectively managing this important species.

“This approach could be very useful in understanding life history strategies and conservation needs of freshwater fishes worldwide,” said Muhlfeld. “Biologists are typically limited to examining movements of fish at checkpoints throughout their lives or over small periods of time. This approach allows examination of a fish’s entire life with significant accuracy.”

More information about this study can be found on the USGS Northern Rocky Mountain Science Center website.