EAST LANSING, Mich. — Browning shoots and needles, twisting and stunted shoots – especially near the tops of evergreen trees and shrubs – are signs that plants may have injuries associated with the herbicide Imprelis, according to a Michigan State University researcher.

“Unlike most conifer insect and disease problems, suspected Imprelis damage occurs rapidly – usually within two to three weeks of application,” said Bert Cregg, associate professor of horticulture and forestry and MSU Extension specialist. “The most commonly affected trees are Norway spruce, Colorado blue spruce and eastern white pine. Other conifers and some hardwood trees also may be affected.”

Imprelis, a relatively new herbicide developed by DuPont, is intended for use by lawn care professionals. It appears trees may be taking up Imprelis that has been applied to turf near the tree’s drip line. Affected trees are showing symptoms commonly associated with herbicide injury.

Cregg said that depending on the level of damage, affected trees may recover since herbicide injury in trees initially can look worse than it really is. He recommends that if possible, homeowners give trees time to recuperate on their own. 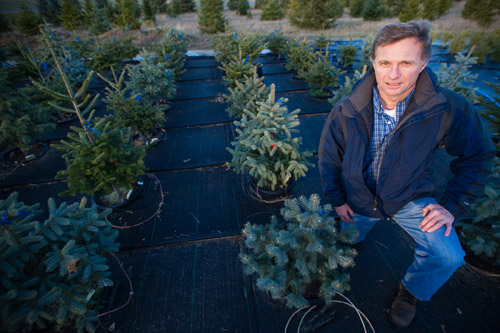 “Trees often can overcome what initially appear to be devastating injuries and emerge relatively unscathed in the long run,” Cregg said. “The best plan for an affected tree at this point is to try to keep the patient comfortable, and let the tree’s recuperative abilities kick in.”

If homeowners suspect Imprelis injuries, they should contact their lawn care companies to determine if and when the product was applied. To care for the tree while it’s recovering, MSU Extension recommends that homeowners irrigate trees during warm, dry weather, but avoid waterlogging. DuPont has also issued a statement advising against fertilizing stressed trees for at least one year.

“Symptoms of herbicide exposure are often dramatic and very characteristic, especially twisting of new shoot growth,” Cregg said. “We have seen affected trees where herbicide was applied to adjacent property, so it’s worthwhile to talk to your neighbor if you suspect damage but have not had anything applied to your lawn.”

For additional information on suspected Imprelis damage, check out “A Homeowner’s Guide to Imprelis Herbicide Injury to Landscape Trees” or visit the MSU Extension News for Ag website.