When psychotherapy is helping someone get better, what does that change look like in the brain? This was the question a team of Canadian psychological scientists set out to investigate in patients suffering from social anxiety disorder. Their findings are published in Psychological Science, a journal of the Association of Psychological Science.

Social anxiety is a common disorder, marked by overwhelming fears of interacting with others and expectations of being harshly judged. Medication and psychotherapy both help people with the disorder. But research on the neurological effects of psychotherapy has lagged far behind that on medication-induced changes in the brain.

To do so, the team—led by David Moscovitch of the University of Waterloo, collaborating with McMaster’s Louis Schmidt, Diane Santesso, and Randi McCabe; and Martin Antony of Ryerson University—used electroencephalograms, or EEGs, which measure brain electrical interactions in real time. They focused on the amount of “delta-beta coupling,” which elevates with rising anxiety. 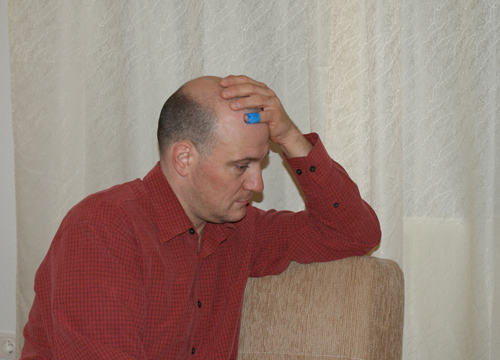 Social anxiety is a common disorder, marked by overwhelming fears of interacting with others and expectations of being harshly judged.

Two control groups—students who tested extremely high or low for symptoms of social anxiety—underwent no psychotherapy.

The patients were given four EEGs—two before treatment, one halfway through, and one two weeks after the final session. The researchers collected EEG measures of the participants at rest, and then during a stressful exercise: a short preparation for an impromptu speech on a hot topic, such as capital punishment or same-sex marriage; participants were told the speech would be presented before two people and videotaped. In addition, comprehensive assessments were made of patients’ fear and anxiety.

“We can’t quite claim that psychotherapy is changing the brain,” cautions Miskovic. For one thing, some of the patients were taking medication, and that could confound the results. But the study, funded by the Ontario Mental Health Foundation, is “an important first step” in that direction—and toward understanding the biology of anxiety and developing better treatments.

The work might also alter perceptions of therapy. “Laypeople tend to think that talk therapy is not ‘real,’ while they associate medications with hard science, and physiologic change,” says Miskovic. “But at the end of the day, the effectiveness of any program must be mediated by the brain and the nervous system.  If the brain does not change, there won’t be a change in behavior or emotion.”