Does it pay to be a lover or a fighter? It depends on how you woo females

As mating season approaches, male animals are faced with a question that can make or break their chances at reproducing: does it pay to be a lover or a fighter? Or both?

Researchers from The University of Manchester and Syracuse University in New York working with the University of Western Australia, found that where animals fall on the lover/fighter scale depends on how much they are able to ensure continued mating rights with females.

In species where fighting for the right to mate means greater control of females, such as in the elephant seal, males invest more in weapons and less in testes size. 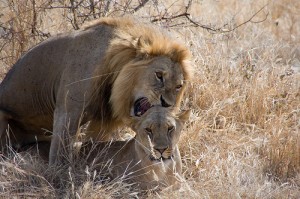 But males produce large weapons and testes in species where fighting for females occurs both before mating – with weapons – and after mating – with sperm.

Some males found fighting the most successful method. Others found fighting was only the first step in sexual relations and also had to rely on large testes ensure their fertility.

The study, published in Nature Communications today (23 January) looked at over 300 species and found that males’ ability to monopolise a female for continued mating drove the way they evolved.

The study looked at sexual behaviours in male mammals, birds, fish, insects and flatworms and has found that males only traded-off investment in weapons and testes when they were sure that females wouldn’t fool around with another male when their back was turned.

John Fitzpatrick, a Lecturer in Animal Evolution at The University of Manchester who was senior author of the research, said these finding help to explain why some animals appear to invest maximally in expensive sexual traits but others are more frugal.

Dr Fitzpatrick said: “We set out to see why some species show trade-offs in sexual traits and others do not – the answer lies in how successfully males are able to keep females from mating with rivals.

“We know animals try to get females in a couple of ways. When they fight for them they sometimes evolve weaponry – such as antlers or a really big body size or big teeth. The other way they do this is not to bother to compete before they mate but to have big testes and the highest sperm quality so that they can fertilise the most eggs.”

Dr Stefan Lüpold, from Syracuse University in New York, said: “It is quite costly to invest in everything. You don’t get something for nothing in evolution, so we wanted to see which species invested in weapons over testes.

“Some of these species invest in both, and that is a bit of a mystery. We will now look at whether maximising investment in sexual traits means you pay the price in some other aspect of life.”

Pheasants, minnows, and bush crickets invested in both weapons and testes, while pinnipeds, such as elephant seals where males are almost five times the size of females, and acanthocephalan (a type of worms) invested more in weaponry but not testes.

Other examples of males investing in weaponry are antlers in red deer, horns in dung beetles, spurs in pheasants and canine teeth in primates.

Dr Lüpold added: “Understanding the ways animals reproduce is important as it helps us understand how species evolve and can prove important for conservation.”