“The answer is yes and no,” says Kathryn Stevenson, an assistant professor in NC State’s College of Natural Resources and lead author of a paper describing the study, published in PLOS ONE. “While students generally mirror a teacher’s belief that global warming is happening, when it comes to the cause of climate change, students reason for themselves and reach different conclusions than their teachers do.” 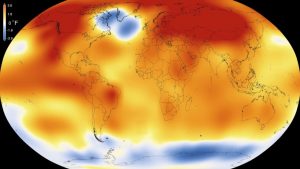 2015 was the warmest year since modern record-keeping began in 1880, according to a new analysis by NASA’s Goddard Institute for Space Studies. The record-breaking year continues a long-term warming trend: 15 of the 16 warmest years on record have now occurred since 2001. Image credit: Scientific Visualization Studio/Goddard Space Flight Center (Click image to enlarge)

While more than 95 percent of the world’s climate scientists attribute global warming to human causes, only about half of U.S. adults agree. Teachers share those views, suggesting such polarization over climate change causes may be spread through classroom teaching.

“We know that adults’ views of climate change are strongly related to their worldviews and ideology,” Stevenson says. “Early adolescence is a time when students’ views are still forming, and we wanted to find out which factors affect their beliefs about climate change.”

Researchers found that having a teacher who believed climate change was occurring – as 92 percent of students in the study did – was a “strong, positive predictor” of students’ belief in global warming.

“Students could interpret scientific information for themselves and deduce that climate change is human-caused or anthropogenic,” says Stevenson, a former science teacher for grades 4-12. “The strongest factor in students’ belief in human-caused climate change was their own knowledge of climate science.”

Most middle school science teachers reported spending a short time focusing on climate change – one to two hours on average.

The study was funded by North Carolina Sea Grant. Co-authors are Nils Peterson, an NC State professor of fisheries, wildlife and conservation biology; and Amy Bradshaw, an NC State zoology student who earned a bachelor’s degree in 2016.