There’s a quality to David Meyer’s art that’s both conceptual and ephemeral, sort of like watching the clouds roll by.

You see with your mind, not your eyes. And even then, as with clouds, shapes move. Things change. 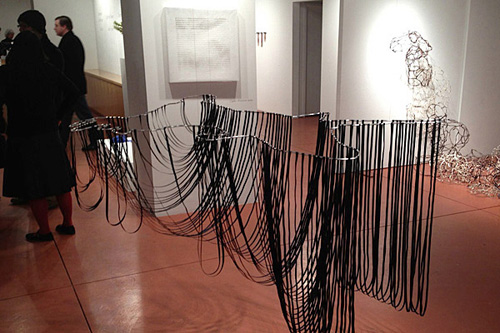 Which is fitting for Meyer, an associate professor in the University of Delaware’s Department of Art, whose show, “Distorted,” will remain on display at the Greater Reston Arts Center in Virginia until Feb. 17. Part of a larger 2012 Winter Focus exhibition, Meyer has joined artists Suzi Fox and Leah Frankel in creating sculptures from unusual materials like tape, plaster and wood.

“As a sculptor, you think a lot about how you want your work seen and revealed,” he says. “My objects are reflecting light, but what the brain is comprehending is subject to our own experiences and imagination.” 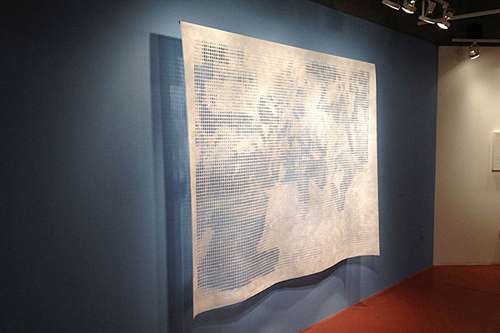 One is a 39- by 63- by 68-inch draped sculpture, made from an arrangement of black ribbon, aluminum and cord. 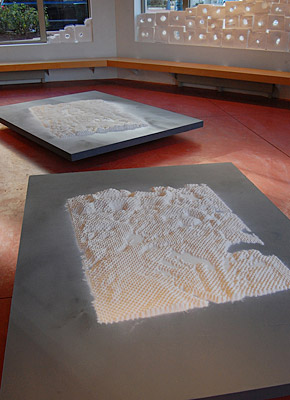 Another is a series of delicate scaled square panels of pressed synthetic fabric stretched over thin frames and punctured at regular intervals in a grid pattern with differently sized, perfectly circular holes.

And the third consists of two massive all-white installations made from 100 pounds of baking flour. Resembling a topographic map, or moonscapes, or even a circuit board when it was created in early January, the flour sculpture began scattering a few weeks back.

“There’s a freedom to making art like this,” says Meyer. “It only becomes real when we believe in it.”

And yet his pieces are based on something real—each one began from actual photographs, real pictures he found while “scouring the Internet looking for imagery.”

His flour sculpture, for instance, is entitled “Plain Sight” because the image “is so obvious, it’s right in front of you.”

So what exactly are we looking at?

“Oh,” he chuckles. “I never say. Art is a personal discovery. When you see something, it’s yours.”