TORONTO, ON – A team of astronomers, including Quinn Konopacky of the Dunlap Institute for Astronomy & Astrophysics, University of Toronto, has made the most detailed examination yet of the atmosphere of a Jupiter-like planet beyond our Solar System.

According to Konopacky, “We have been able to observe this planet in unprecedented detail because of the advanced instrumentation we are using on the Keck II telescope, our groundbreaking observing and data-processing techniques, and because of the nature of the planetary system.” 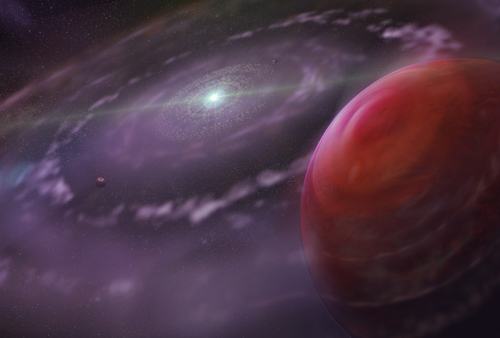 Artist’s rendering of the planetary system HR 8799 at an early stage in its evolution, showing the planet HR 8799c, a disk of gas and dust, and interior planets. Image credit: Dunlap Institute for Astronomy & Astrophysics; Mediafarm

Konopacky is lead author of the paper describing the team’s findings, published on March 14th in Science Express, and March 22nd in the journal Science. 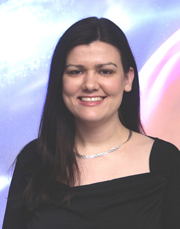 The team, using a high-resolution imaging spectrograph called OSIRIS, uncovered the chemical fingerprints of specific molecules, revealing a cloudy atmosphere containing carbon monoxide and water vapour. “With this level of detail,” says Travis Barman, a Lowell Observatory astronomer and co-author of the paper, “we can compare the amount of carbon to the amount of oxygen present in the planet’s atmosphere, and this chemical mix provides clues as to how the entire planetary system formed.”

There has been considerable uncertainty about how systems of planets form, with two leading models, called core accretion and gravitational instability. Planetary properties, such as the composition of a planet’s atmosphere, are clues as to whether a system formed according to one model or the other.

“This is the sharpest spectrum ever obtained of an extrasolar planet,” according to co-author Bruce Macintosh of the Lawrence Livermore National Laboratory. “This shows the power of directly imaging a planetary system. It is the exquisite resolution afforded by these new observations that has allowed us to really begin to probe planet formation.”

The spectrum reveals that the carbon to oxygen ratio is consistent with the core accretion scenario, the model thought to explain the formation of our Solar System.

The core accretion model predicts that large gas giant planets form at great distances from the central star, and smaller rocky planets closer in, as in our Solar System. It is rocky planets, not too far, nor close to the star, that are prime candidates for supporting life.

“The results suggest the HR 8799 system is like a scaled-up Solar System,” says Konopacky. “And so, in addition to the gas giants far from their parent star, it would not come as a surprise to find Earth-like planets closer in.” 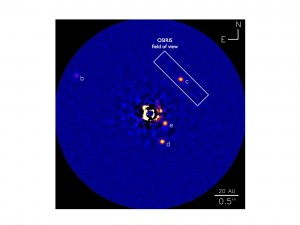 One of the discovery images of the system obtained at the Keck II telescope using the adaptive optics system and NIRC2 Near-Infrared Imager. The rectangle indicates the field-of-view of the OSIRIS instrument. Image credit: NRC Canada, C. Marois and Keck Observatory (Click image to enlarge)

The planet, designated HR 8799c, is one of four gas giants known to orbit a star 130 light-years from Earth. The authors and their collaborators previously discovered HR 8799c and its three companions back in 2008 and 2010. All the planets are larger than any in our Solar System, with masses three to seven times that of Jupiter. Their orbits are similarly large when compared to our system. HR 8799c orbits 40 times farther from its parent star than the Earth orbits from the Sun; in our Solar System, that would put it well beyond the realm of Neptune.

Konopacky and her team will continue to study the super-sized planets to learn more details about their nature and their atmospheres. Future observations will be made using the recently upgraded OSIRIS instrument which utilizes a new diffraction grating—the key component of the spectrograph that separates light according to wavelength, just like a prism. The new grating was developed at the Dunlap Institute and installed in the spectrograph in December 2012. 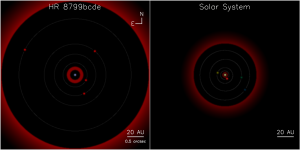 Schematic representation of the HR 8799 planetary system compared to our solar system (viewed pole on and at the same distance as HR 8799). Image credit: NRC Canada & C. Marois (Click image to enlarge)

The Dunlap Institute for Astronomy & Astrophysics continues the legacy of the David Dunlap Observatory of developing innovative astronomical instrumentation, including instrumentation for the largest telescopes in the world. The research of its faculty and Dunlap Fellows spans the depths of the Universe, from the discovery of exoplanets, to the formation of stars, the evolution and nature of galaxies, dark matter, the Cosmic Microwave Background, and SETI. The institute also continues a strong commitment to developing the next generation of astronomers and fostering public engagement in science.