Kaitlin Sidorsky, who received her Ph.D. in political science at the 247th Commencement, did the first national survey that included appointments to state boards and commissions as well as elected office. Many female respondents said appointed office lets them accomplish more without the overhead of fundraising, campaigning, and media presence.

PROVIDENCE, R.I. [Brown University] — It was during the second debate of the 2012 U.S. presidential campaign that Mitt Romney made his infamous “binders full of women” comment in response to a question about pay equity. His answer referred to binders with resumes of women applying for various appointments that were submitted to him as governor of Massachusetts. Not only did he set off a million social media memes, but he also got Kaitlin Sidorsky’s wheels turning on a potential dissertation topic.

“I started thinking about who these women are and how they get into the binders,” Sidorsky said. 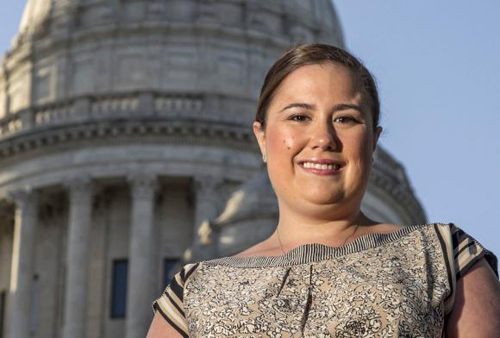 The answers to those questions eventually became the heart of her dissertation, “One Way or Another? Understanding Women’s Paths to Appointed and Elected Office,” for which she received a doctorate in political science at the 2015 Commencement ceremony.

Having had an interest in women in politics since her undergraduate days at Bryant University, Sidorsky, a Long Island native, decided when she came to Brown for graduate school that she wanted to take a deeper look at how and why women end up in politics.

To do this, Sidorsky developed an original survey, the State Political Pathways Survey, which she sent out by email to state legislators and political appointees in 20 states. Surveys consisted of 55 to 65 questions that asked respondents about current jobs and future ambitions. They were sent to both high- and low-level elected and appointed state officials working in departments that covered four areas: health, commerce, environment, and natural resources. She followed those with in-depth interviews of 21 female respondents, some of whom held elected positions and others who had been appointed into their jobs.

Sidorsky’s goal with the survey was not only to get a picture of who these women were and how they ended up in their jobs, but also how they perceive themselves and their qualifications for public office. Little research exists on officials in appointed office, so the results of Sidorsky’s survey is one of the first comprehensive snapshots of the pipeline to state-level political appointments that also includes state boards and commissions.

It’s often assumed that elected office is the only way to come into politics, Sidorsky said, but appointed office, particularly at the level of the state, is an even more common route for women to enter into government work. It’s a more appealing route for women who don’t necessarily identify as having ambition for a political office, Sidorksy said. Instead, they end up there because it involves work in an area they are interested in and they see it as an opportunity to affect change.

“The findings say a lot about what women think about politics and why that may be turning them off from going into elected office,” Sidorsky said. “A lot of these women had said politics were negative, that you couldn’t get anything done in an elected office, but you could get something done in your appointment because it wasn’t political.”

Sidorsky said this disavowal of a connection to politics, even by women serving in high-level positions in state office, was the most surprising finding from her survey.

“These women were saying their jobs were not political, even though they are funded by the state government, their job is only there because of the government, and they have an effect on constituents within the state.”

She said it points to the importance of broadening the definition of politics to include both elected and appointed office.

Over the summer, Sidorsky plans to expand upon her research with interviews of some of the male respondents to her survey and put all of her findings into a book manuscript in the coming months. In the fall, she begins a tenure-track position at Coastal Carolina University in the political science department.

She hopes her research will be used to better understand why elected office doesn’t appeal to women as often as to men and what could be changed to get more women to run.