Dissecting the animal diet, past and present

In a study published March 18 in the journal Ecology and Evolution, authors Matt Davis and Silvia Pineda-Munoz argue that scientists need to focus as much on “when” animals eat as they do “what” animals eat. Without the proper time context, they say, an animal’s diet can tell very different stories.

“Diet is one of the most important features of animals,” said Davis, a Yale graduate student in geology and geophysics. “But often, we can’t seem to agree on what animals ate. Grizzly bears, for example, eat different foods at different times. If you looked at their diet in the spring, it would look like what wolves eat, but in the fall, bears eat mostly seeds, just like squirrels.” 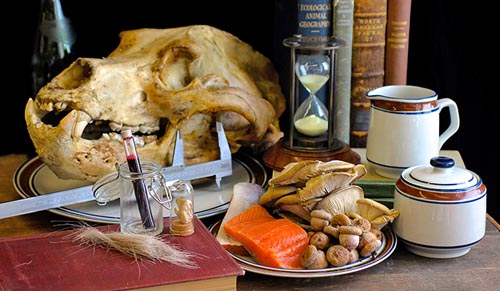 Yet often, diet proxies don’t agree. This is because each one records what an animal eats over different lengths of time. Chemicals in hair, for example, may offer information about nutrition over the course of several years; stomach contents would reveal perhaps a week’s worth of meals. Each could give a different answer for what an animal ate.

Davis and Pineda-Munoz give examples of how such disparity can be problematic in research. In one instance, scientists unintentionally reversed the order of a food chain in a lake in East Africa because they hadn’t factored in the different speeds that zooplankton and their predators absorb nutrients. In another, researchers thought that certain regions of ancient Africa were covered in forests because they assumed the fossil elephants they found there ate mostly trees, just like modern elephants; however chemical analysis showed the ancient elephants actually ate mostly grass, so the “forests” were most likely fields.

“The correct diet proxy depends on the question you’re asking,” Davis said. “We can’t just look at stomach contents sampled yesterday and extrapolate them out for 1 million years.”

Davis and Pineda-Munoz suggest that researchers explicitly state the time scales for the diet proxies they use to avoid confusion. They also call upon scientists to consider the effects of time scale at each stage of their research.

Pineda-Munoz points out that the different time scales can actually be helpful to research. “By using different proxies like the chemical signatures in feathers and blood we can tell not just what a bird is eating but what it ate a year ago and how its diet changed since then,” she said. “This is especially important for rare or endangered species because we can effectively time travel through their diet without harming the animal.”

The Yale Institute for Biospheric Studies, the Geological Society of America, the American Society of Mammalogists, the International Paleontological Association and Congress, Macquarie University’s HDR Project Support Funds, and the Smithsonian Institution provided partial funding for the study.