Long thought to produce only one generation of tree-killing offspring annually, some populations of mountain pine beetles now produce two generations per year, dramatically increasing the potential for the bugs to kill lodgepole and ponderosa pine trees, University of Colorado Boulder researchers have found.

Because of the extra annual generation of beetles, there could be up to 60 times as many beetles attacking trees in any given year, their study found. And in response to warmer temperatures at high elevations, pine beetles also are better able to survive and attack trees that haven’t previously developed defenses.

These are among the key findings of Jeffry Mitton, a CU-Boulder professor of ecology and evolutionary biology, and Scott Ferrenberg, a graduate student in that department. The study is being published this month in The American Naturalist. 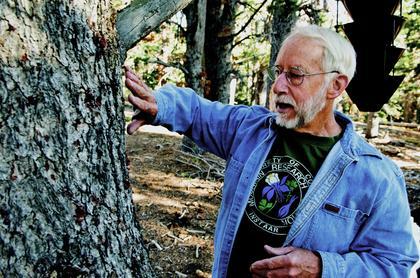 This exponential increase in the beetle population might help to explain the scope of the current beetle epidemic, which is the largest in history and extends from the Sangre de Cristo Mountains in New Mexico to the Yukon Territory near Alaska.

“This thing is immense,” Mitton said. The duo’s research, conducted in 2009 and 2010 at CU’s Mountain Research Station, located about 25 miles west of Boulder, helps explain why.

“We followed them through the summer, and we saw something that had never been seen before,” Mitton said. “Adults that were newly laid eggs two months before were going out and attacking trees” — in the same year. Normally, mountain pine beetles spend a winter as larvae in trees before emerging as adults the following summer. 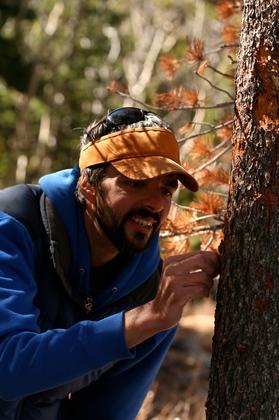 These effects may be particularly pronounced at higher elevations, where warmer temperatures have facilitated beetle attacks. In the last two decades at the Mountain Research Station, mean annual temperatures were 2.7 degrees Fahrenheit warmer than they were in the previous two decades.

The Mountain Research Station site is about 10,000 feet in elevation, 1,000 feet higher than the beetles have historically thrived. In their study, Mitton and Ferrenberg emphasize this anomaly.

“While our study is limited in area, it was completed in a site that was characterized as climatically unsuitable for (mountain pine beetle) development by the U.S. Forest Service only three decades ago,” they write.

But in 25 years, the beetles have expanded their range 2,000 feet higher in elevation and 240 miles north in latitude in Canada, Mitton said.

Ferrenberg had the idea to monitor the beetles at higher elevations partly because trees at lower elevations have been attacked by beetles for centuries and have developed some defenses.

Lodgepole pines at higher elevations tended to have a lower density of resin ducts, which transport resin, the sole defense against beetles. The number of resin ducts in a tree can be a “marker” for whether a tree has a higher or lower resistance to a beetle attack, Ferrenberg said.

The trees at higher elevations had not faced the same intensity of beetle attacks as those at lower elevations until temperatures warmed, and they have not faced pressures of natural selection exerted by attacking beetles. “The trees in that area are somewhat naïve in their response,” Ferrenberg said.

These data help explain why westbound motorists emerging from the Eisenhower Tunnel on I-70 can look up, from 11,000 feet in elevation, and see beetle-killed trees. “We think we see some of the reason for the fact that this epidemic is so widespread,” Mitton said.

The research was funded by the U.S. Department of Energy.

More on this story will appear in the next edition of Colorado Arts and Sciences Magazine at https://artsandsciences.colorado.edu/magazine/