Washington, D.C. — Superconductivity is a rare physical state in which matter is able to conduct electricity—maintain a flow of electrons—without any resistance. This phenomenon can only be found in certain materials at low temperatures, or can be induced under chemical and high external pressure conditions. Research to create superconductors at higher temperatures has been ongoing for two decades with the promise of significant impact on electrical transmission. New work from a team including Carnegie’s Xiao-Jia Chen and Ho-kwang “Dave” Mao demonstrates unexpected superconductivity in a type of compounds called iron selenium chalcogenides. Their work is published online by Nature on February 22. 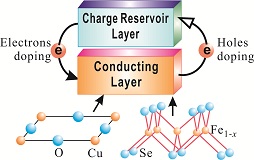 A superconducting substance’s electrical resistance disappears at a critical transition temperature, TC. The early conventional superconductors had to be cooled to extremely low temperatures—below TC—in order for electricity to flow freely. Then in the 1980s, scientists discovered a class of relatively high-temperature superconductors. Researchers have continued to study this phenomenon and look for it in an array of materials. It has been established that superconductivity can be affected by a substance’s crystallographic structure, electronic charge, or the orbit of its electrons.

Recently scientists have discovered superconductivity in iron-based selenium chalcogenides. Chalcogenides are compounds that combine an element from group 16 on the periodic table (referring sulfur, selenium, tellurium) with another element, in this case iron. A selenide is a chemical compound containing selenium.

It was known that under pressure iron selenides become superconducters between -406 and -402 degrees Fahrenheit (30-32 K). But the research team, led equally by Liling Sun of the Chinese Academy of Sciences and Xiao-Jia Chen, discovered a second wave of superconductivity can be observed at higher pressures.

“These observations highlight the search of high-temperature superconductivity in complex structural and magnetic materials,” Chen said. They confirmed these results with a variety of magnetic and electrical resistance measurements. They were also able to find reemerging superconductivity in another type of iron-based selenium chalcogenide, under very similar conditions.
They observed that the basic structure of these compounds was not changed under the extreme pressure and thus further research is needed to determine what is happening on a closer structural level.

Chen stated that “our work will likely stimulate a great deal of future study, both experimental and theoretical, in order to clarify what causes this reemergence of superconductivity.”