COLUMBIA, Mo.– It might seem obvious that a dinosaur’s leg bone connects to the hip bone, but what came between the bones has been less obvious. Now, researchers at the University of Missouri and Ohio University have found that dinosaurs had thick layers of cartilage in their joints, which means they may have been considerably taller than previously thought. The study is being published this week in the journal PLoS-ONE (Public Library of Science).

“Our study of the limbs of modern-day relatives of dinosaurs shows that dinosaurs were significantly taller than original estimates,” said Casey Holliday, lead author of the study and an anatomy professor in the MU School of Medicine. “The ends of many dinosaurs’ long bones, which include leg bones such as the femur or tibia, are rounded and rough and lack major articulating structures like condyles, which are bony projections. This indicated that very thick cartilages formed these structures, and therefore the joints themselves, and would have added significant height to certain dinosaurs. This study offers new data into how and why reptiles, and mammals, such as humans, build their joints with such different amounts of bone and cartilage.” 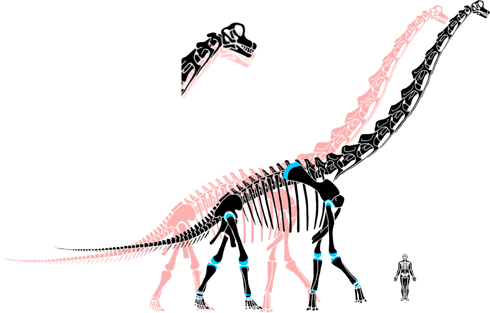 About the image: This animation demonstrates the difference in height for a Brachiosaurus after inserting the proper amount of cartilage (shown in the blue highlighted areas) in the dinosaur. Image credit: University of Missouri

Holliday and Lawrence Witmer, a professor of anatomy at the Ohio University College of Osteopathic Medicine, conducted research on ostriches and alligators, the closest, modern-day relatives of dinosaurs, and then studied the fossilized limbs of different dinosaurs including Tyrannosaurus rex, Allosaurus, Brachiosaurus and Triceratops. The team determined that the lengths of alligators’ and ostriches’ limbs included between 6 and 10 percent cartilage.

Using a “cartilage correction factor,” Holliday determined that many theropod dinosaurs, such as Tyrannosaurus, were only modestly taller whereas ornthischian  and sauropod dinosaurs, such as Triceratops and Brachiosaurus, may have been 10 percent taller or more. For example, Brachiosaurus, previously thought to be 42 feet tall, may actually have been more than a foot taller with the additional joint cartilages.

“This study is significant because it shows that bones can’t always speak for themselves,” Witmer said. “To understand how dinosaurs moved, we need to analyze the bones as they were inside their bodies, including their cartilage. The dinosaur bones mounted in museums don’t accurately reflect what the animals actually had in their bodies in life because the cartilage caps were lost along with the other soft tissues. Knowing how much cartilage was lost allows us to better restore the structure of a living dinosaur bone, which then allows us to better understand how dinosaurs moved and lived.” 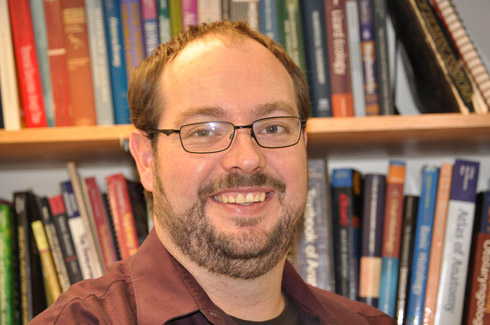 Understanding the structures of the soft tissues in dinosaurs might also have implications for their speed and posture. While an increase in limb length typically means a taller dinosaur, it could also mean a faster or slower animal, depending on how it affects the skeleton, Holliday said. This finding could have major implications on how scientists currently understand dinosaur anatomy.

Dinosaur bones are different than the bones of mammals, including humans. Mammals have small protrusions at the end of each bone that help it connect with another bone at a joint, like two puzzle pieces. The bones are linked by a very thin layer of cartilage, which provides padding in the joint, but often wears down leading to painful conditions like arthritis. Comparatively, dinosaur bones have rounded ends and no obvious way to connect one bone to another. Soft tissue structures like cartilage and muscles leave marks on bones, which enable paleontologists to make sophisticated determinations about a dinosaur’s physical attributes.

Alligators have smooth, rounded bones while young ostriches have rough surfaces on their bones that mark where blood vessels feed large cartilaginous structures in the joints. Both characteristics are similar to dinosaur bones.

Holliday’s team dissected the alligator and ostrich bones and made casts of the bones with cartilage. The team then removed the cartilage and compared the bones to the casts. The bones without the cartilage were 4 to 10 percent smaller. From the evidence, Holliday and his research team concluded that certain dinosaurs had a significant amount of cartilage, and thus, were taller than original estimates. In the future, Holliday hopes to collaborate with MU veterinarians to study how and why different vertebrates build their joints with different proportions of cartilage and bone.

Holliday and Witmer led a research team that included Ryan Ridgely from Ohio University and Jayc Sedlmayr from Louisiana State University. The National Science Foundation and Ohio University provided funding for this research. PLoS-ONE is an open-access and free journal available online at: https://www.plosone.org