When investigating a murder, every clue helps. New research from North Carolina State University sheds light on how – and whether – blow flies survive when buried underground during their development. It’s an advance that will help forensic investigators understand how long a body may have been left above ground before being buried – or possibly whether remains were moved from one grave to another.

“Blow flies are probably the most important insects to forensic entomology,” says Dr. Wes Watson, a professor of entomology at NC State and co-author of a paper describing the research. “They are usually the first insects to arrive after an animal – or a person – has died.” 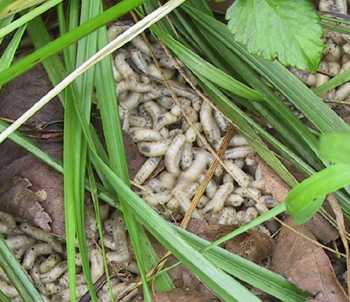 Improving our understanding of blow flies can give investigators clues on how a body is handled after a murder. Image credit: North Carolina State University.

These flies can arrive at a body in less than 10 minutes, and lay their eggs within an hour. These eggs hatch into larvae – or maggots – that go through three stages, called instars, before they’re ready to turn into adults. Near the end of the third instar, if the body is above ground, the larvae crawl up to 40 yards away from the remains and burrow as much as six inches into the ground to pupate. The pupa is similar to the cocoons used by moths, where the larvae turn into adults. The fully developed fly emerges from the pupa three to five days later and the cycle repeats itself.

Understanding the life cycle of blow flies is extremely useful for murder investigations. Forensic entomologists, such as Watson, can determine approximately when insects found the corpse based on the blow flies’ stage of development and the size of the maggots. This is different from estimating time of death, because multiple factors can influence the time of insect arrival. For example, a body could be stored in an airtight cooler for several days before being dumped in a field.

But while much is known about the development of blow flies when bodies are exposed above ground, Watson and his team wanted to know how their development would be affected if a body was buried after the blow flies had laid their eggs.

To find out, the researchers buried pupae, second instar larvae and third instar larvae from two different blow fly species. The insects were buried at depths of 5 centimeters (cm), 25 cm and 50 cm, because murder victims are usually buried in shallow graves. The researchers also gave the insects beef and pork as a food source.

“This gives investigators additional information. We can now tell that a body was on the surface long enough for blow flies to arrive and lay eggs,” Watson says, “or that the body may have been moved – exposing it to blow flies.” In fact, this research stemmed directly from questions that arose during a murder investigation, in which a body had been moved from one burial site to another.

The paper, “Blow flies (Diptera: Calliphoridae) survive burial: Evidence of ascending vertical dispersal,” is published online by the journal Forensic Science International. The paper was co-authored by Watson; Geoff Balme, a former NC State post-doctoral researcher; Steve Denning, an entomology research specialist at NC State; and Jonathan Cammack, a Ph.D. student at NC State. The research was supported, in part, by the National Institute of Justice.

NC State’s Department of Entomology is part of the university’s College of Agriculture and Life Sciences.