Device Could Speed Diagnosis of Infections

A new device created by a collaborative team of UA engineers and scientists may significantly reduce the amount of time necessary to diagnose tissue infections.

When a patient arrives at a hospital with a serious infection, doctors have precious little time to make an accurate diagnosis and prescribe treatment accordingly.

Their ability to act quickly and correctly not only makes a difference to the patient’s outcome, it determines whether the infection spreads to other patients in the clinic — and can even contribute to the development of drug-resistant bacteria.

A new diagnostic device created by collaborative team of University of Arizona engineers and scientists may significantly reduce the amount of time necessary to diagnose tissue infections. The device’s novel approach to molecular diagnostics, called DOTS qPCR, is faster, more efficient and less expensive than options currently being used in clinics. The work is described online in the journal Science Advances. 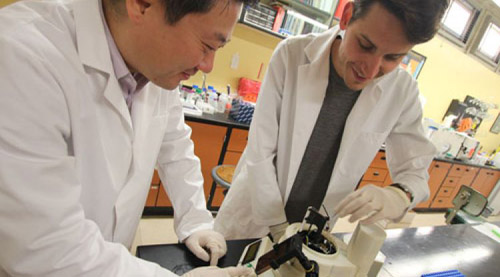 Jeong-Yeol Yoon and Dustin Harshman work on a device that can analyze pathogens in real time. (Photo: Pete Brown/College of Engineering)

“We have developed a completely different type of system than what exists out on the market,” said Dustin Harshman, a former graduate student in the Biomedical Engineering Graduate Interdisciplinary Program and currently a scientist at Ventana Medical Systems. “We want to see physicians get diagnostic information more rapidly and prescribe better initial therapies.”

Pathogens and infectious diseases are typically detected using a technique called polymerase chain reaction, or PCR. The method involves rapidly heating and cooling DNA molecules from a biological sample in a process called thermal cycling. This results in the amplification of the target DNA into millions, and even billions, of copies. Scientists and physicians can then use the copies to identify the type of pathogen causing the infection. The problem is that most PCR tests can take up to an hour or more, and a physician’s decision-making window is typically less than 10 minutes.

“With DOTS qPCR, we are able to detect amplification and identify the infection after as few as four thermal cycles, while other methods are working with between 18 and 30,” said Jeong-Yeol Yoon, a professor in the Department of Agricultural and Biosystems Engineering with a joint appointment in the Department of Biomedical Engineering who is a member of the BIO5 Institute. “We can get from sample to answer in as little as 3 minutes and 30 seconds.”

DOTS qPCR, invented by Yoon and his research group, stands for droplet-on-thermocouple silhouette real-time PCR. The technology relies on the measurement of subtle surface tension changes at the interface of a water droplet suspended in an oil medium. The water droplet, which contains the target DNA to be amplified, is moved along a heat gradient in the oil to begin the chain reaction. As more copies of the target DNA are produced, they move toward the oil-water interface, resulting in measurable changes in surface tension.

Remarkably, the size of the droplet can be measured using a smartphone camera, providing a method to observe the course of the reaction in real time.

“What’s interesting about the way we approached this is that we’ve developed a deep understanding of what’s happening at a molecular level in our system,” said Harshman, who initially struggled to determine how to monitor the course of the reaction. “That kind of understanding gave us the ability to figure out why it was failing, and then leverage that failure as an advantage to create a completely new method.”

In addition to much faster diagnosis times, the system does not require samples to be completely free of other contaminants. This can save valuable time otherwise spent preparing samples for testing.

“The system still works with relatively dirty samples,” Yoon said. “We can use very minimal processing and still make the detection in a short time.”

“It’s easy to use, smartphone-integrated and saves money and labor using expensive equipment,” Yoon explained. “This technology has a lot of commercial potential, and we’d be happy to work with industry to bring it to market.”

DOTS qPCR also has major applications in biological research, where PCR is an indispensable tool used in studying everything from hereditary disease to the evolutionary tree. Ultimately, Harshman and Yoon hope the technology will transform the operations of hospital emergency rooms, where saving time to diagnosis translates into saving lives.

“We’re envisioning a device that will provide physicians with answers as soon as they perform a biopsy, while they’re still sitting with the patient,” Harshman said. “By saving diagnosis time, we can decrease complications for patients, isolate infections to prevent spreading and avoid creating selective pressure for antibiotic-resistant bacteria, which is a huge burden on the medical system.”