The research focused the state of Mato Grosso, the epicenter of an agricultural revolution that has made Brazil one of the world’s top producers of soybeans, corn, cotton, and other staple crops. That Brazil has become an agricultural powerhouse over the last decade or so is clear. What has been less clear is who is reaping the economic rewards of that agricultural intensification — average Brazilians or wealthy landowners and outside investors.

Leah VanWey, associate professor of sociology at Brown University and the study’s lead author, says her results suggest at least one type of agricultural intensification — double cropping — is associated with development that improves well-being for average rural Brazilians.

Looking at agricultural and economic data from the last decade, VanWey found that in municípios (counties) where double cropping is common, GDP and median per capita income were both substantially higher. Double cropping was also associated with higher quality schools and better public sanitation. “We looked at two indicators of private goods and two indicators of public goods,” VanWey said. “Overall, we find this really nice pattern of impacts on development associated with double cropping. These benefits seem to be widespread through the population.”

Meanwhile, intensification to single-crop fields from pasture with low stocking rates was not associated with development gains, the research found. VanWey says that is probably because double cropping is more labor intensive, which creates jobs, and more lucrative, which creates more tax revenue that can be invested in public goods. That was evidenced by a case study of two counties within Mato Grosso that was part of this new research.

“The community with the most double cropping also has a soy processing plant that employs thousands of workers as well as complementary poultry and swine raising and processing,” VanWey said. “In the long run there isn’t much money in just growing things and selling them, but processing allows the local area and workers to retain more of the per-unit cost of the final product.” 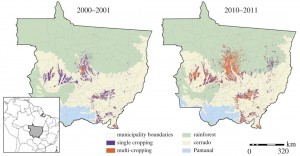 Double cropping in a decade. Double cropping (orange) in Mato Grosso has increased noticeably between 2000-01 and 2010-11. The benefits extend broadly in the regional economy. Image credit: Brown University (Click image to enlarge)

The findings are published in an issue of Philosophical Transactions of the Royal Society B focused on agricultural development in Brazil.

Mato Grosso has drawn much attention from scholars in recent years. It is not only the heart of Brazil’s agricultural production but also sits on the border of the nation’s cerrada (savanna) biome and the Amazon rainforest biome. Some evidence over the last decade suggests that even as agricultural production in the state has increased, deforestation in the Amazon region has slowed. For that reason, the state is seen by many as a model for agricultural development that minimizes harm to the environment.

To understand how land use is associated with economic development, VanWey teamed with John Mustard, professor of geological sciences at Brown, and Stephanie Spera, Mustard’s graduate student. Spera and Mustard used imaging from NASA’s Terra satellite to track land use changes in Mato Grosso from 2000 to 2011. They captured satellite images of the region every 16 days for a year. They looked for peaks in the greenness of the fields followed by a rapid loss of greenness, indicating the ripening and subsequent harvesting of a crop. Two peaks in greenness in the same year is an indicator that a field is double-cropped. Spera and Mustard recorded images from 2000 to 2001, and again from 2010 to 2011, to see how usage had changed over the decade. They found substantial increases in both single- and double-cropped fields.

VanWey then matched those data to local economic data, with the help of Brown undergraduates Rebecca de Sa and Dan Mahr.

The research showed that intensification to single-crop fields from pasture had no effect on economic variables. Double cropping, however, was associated with strong gains. For example, where double cropping was common, median income was substantially higher. According to VanWey’s calculations, median income for citizens of Mato Grosso would be decreased from 346 Brazilian reals per month (about $190) to 144 reals without the effects of double cropping. On the other hand, if all areas double cropped, monthly income would increase to 459 reals.

“[Double cropping] increases median incomes in an entire county, not just among people working in agriculture,” VanWey said. “So I’m arguing that it’s going to have these effects on the entire economy by providing employment that’s related to the agriculture.”

The positive association with public goods such as schools was strong as well. For that analysis, VanWey looked at a 10-point quality assessment scale used by the Brazilian government. She calculated that if all areas of Mato Grosso double cropped, scores on the assessment for public schools would increase from an average of 4.2 to 5.4.

The increases in measures of both personal wealth and public goods suggest widespread economic development associated with double cropping, VanWey concludes. However she’s not yet ready to advocate for public policy steps like blanket subsidies for double cropping. More research needs to be done, she says, to find out why double cropping thrives in some places but not others.

She and her colleagues are working on those questions now.

Funding for the research came from NASA, the National Institutes of Health, and Brown University’s Environmental Change Initiative.