Despite Efforts for Change, Bangladeshi Women Prefer to Use Pollution-Causing Cookstoves

Women in rural Bangladesh prefer inexpensive, traditional stoves for cooking over modern ones — despite significant health risks, according to a Yale study in the Proceedings of the National Academy of Sciences.

A large majority of respondents (94%) believed that indoor smoke from the traditional stoves is harmful. Still, Bangladeshi women opted for traditional cookstove technology so they could afford basic needs.

“Non-traditional cookstoves might be more successful if they were designed with features valued more highly by users, such as reducing operating costs even if they might not reduce environmental impact,” said Mushfiq Mobarak, a co-author and associate professor of economics at the Yale School of Management.

In most rural homes, where there is no electricity, food is cooked over an open fire using wood, agricultural residue, and animal dung, known together as “biomass.” Exposure to this pollution causes 50,000 deaths in Bangladesh a year and over 2 million worldwide. The release of black carbon is also a significant source of greenhouse gases.

Fully 98% of Bangladesh’s 131 million people cook with biomass using traditional stoves, despite years of efforts by governments and health organizations to promote models that are fuel-efficient and have chimneys. Moreover, 92% of 2,280 Bangladeshi households surveyed between July and September 2008 had never seen a non-traditional cookstove.

“The adoption and use of these non-traditional cookstoves in the developing world have, with few exceptions, remained disappointingly low,” said Puneet Dwivedi, a co-author of the study and a postdoctoral researcher at the Yale School of Forestry & Environmental Studies (F&ES). 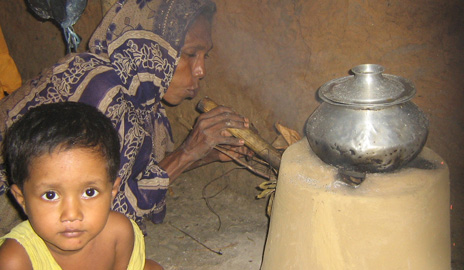 A full 98% of Bangladesh's people prefer to cook with traditional stoves that burn a combination of wood, agricultural residue, and animal dung. Image credit: Yale University

When given a hypothetical choice between a cash subsidy and a non-traditional cookstove, the respondents overwhelmingly said they would prefer to spend money on doctors, schools, electricity, clean water, latrines, seeds for planting, and structures to protect their land from flooding.

The researchers also conducted a randomized controlled trial in 42 villages in the Bangladeshi districts of Hatiya and Jamlpur to estimate how sensitive Bangladeshi households are to the price of non-traditional cookstoves.

“We find consistent evidence across both analyses suggesting that women in rural Bangladesh do not perceive indoor air pollution as a significant health hazard,” said Dwivedi.

Lynn Hildemann and Grant Miller of Stanford University are the other co-authors of the paper, “Low Demand for Nontraditional Cookstove Technologies.”