When Ariela Suster saw her line of bracelets, belts, necklaces and other accessories adorning runway models at the most recent New York Fashion Week, she was amazed at how far her business has come.

In just six years, Suster and her company, Sequence, have helped more than 40 young men in El Salvador craft handmade accessories that are sold all over the globe, providing an alternative to joining gangs. But as her business grew, she grappled with several challenges, including an ineffective email process for corporate sponsors to design their own custom bracelets, and frustration that her website wasn’t conveying the work that went into the company’s products. She wanted customers to be part of the journey that her employees were on and feel their impact on the lives of these young men and their communities.

Now Sequence has launched a new and more interactive website that solves those issues. The company is also introducing a year-long leadership program for students called Sequence Ambassador and is researching a potential collaboration in Los Angeles with another organization that helps reintegrate formerly incarcerated gang members back into society. 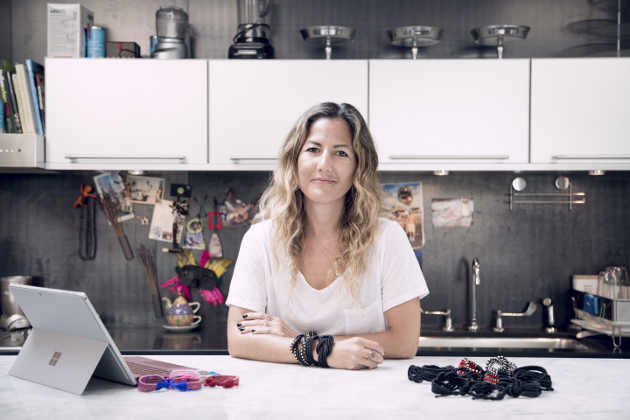 Named for Suster’s mission to disrupt the sequence of violence, Sequence is a jewelry and accessories business that gives the men it employs an alternative life path by offering art and PC classes, as well as wages up to three times higher than they could make elsewhere to support their families and build homes. Suster trained these men, who are in their late teens and 20s, and they in turn trained new recruits, who quickly adapted to their new careers as modern artisans. They learned how to do a bit of coding for Near Field Communication (NFC) chips that now sit in a collection of bracelets. They learned design skills through Adobe Photoshop and inking on Surface laptops to help them become creators. They also picked up video production and many other skills that allow them to be part of the telling of their stories. They regularly Skype with Suster, who spends about half the year in New York, and is on the road frequently.

Suster, who grew up in El Salvador amid its civil war, felt its impact in a very personal way when her brother was kidnapped and held captive for a year. She left in 1995 after that happened to attend Skidmore College in New York. She made her way to New York City, where she worked as a fashion editor for a decade for publications such as InStyle, Lucky and Harper’s Bazaar.

But in her heart, she never left El Salvador. She wanted to translate her experience in the fashion industry to a business model that could change lives in her native country.

“One of the things really cool to see with Sequence is how most of these artists came in at survival mode. They didn’t know much beyond providing. There’s nothing else you think about,” she says. “So now, they have a safe job in a safe place and make enough money. They can now start thinking deeper things, like what their goals are. They have never thought about that. Nobody had ever asked them that, until now.”

The company’s inclusion in Diane von Furstenberg’s fall collection shows how the journey of social entrepreneurship has come full circle for Suster.

This collaboration with von Furstenberg is a first for Sequence, which created accessories for the well-established designer’s runway show that will be available for sale in 2018.

“Most of these guys are not trained artisans. We trained them from scratch,” Suster says. “And to think that now we’re creating products for runways!”

“We talked with Ariela, and she wants to invest in expanding her business with corporate partnerships and launching a college-based ambassador program,” says Divya Kumar, Senior Product Marketing Manager for Microsoft Edge, which helped Suster through a program that focuses on showcasing web technologies to help organizations like Sequence. Suster wanted to retool Sequence’s website to tell her story better and more broadly, as well as use it to kick off the ambassador program for students and have better communication with corporations for partnerships.

“Previously, she’s sent them a catalog of products, and there’s a lot of back and forth deciding what they want,” Kumar says. “We thought, we can build an interactive experience that can save steps in those communications.”

Sequence’s new website adds an interactive way to customize bracelets and has 3D videos of the studio in El Salvador, as well as an augmented-reality experience that shows consumers what the bracelet they choose would look like on their arm. In meeting face to face with many partners, Suster realized there was an opportunity to customize and design their bracelet on the spot, and show them what it’d look like, on their arm.

Now, corporate customers can go to the website and design a bracelet, and receive a unique URL for their product — usually a bracelet made with colors and designs specific to that business. It’s a solution the Edge team dubbed a bracelet 3D customizer and it helps corporate partners streamline their communications with Sequence and make faster decisions.

The videos on the Sequence site embody a storytelling platform that helps bring customers virtually into the El Salvador studio where Sequence’s pieces are being made, showing them what it takes to make these products.

“When you land on this site, you’re not just seeing bracelets,” Kumar says. “Now you’ll know its history, which adds more meaning to what you’re actually buying.”

“I really want to have the customer be part of the journey, to be part of that impact and in the lives of these young men and their communities,” adds Suster. “To relate to that journey, Edge came up with the idea of 360-degree videos inside our workshop, which is super cool. Through time-lapse videos of the guys doing the work, they’ll see our products are all handmade and of really great quality.”

Customers can see for themselves how Suster’s focus on prevention provides opportunities these men wouldn’t have otherwise.

“The thing we focused on is having a bigger vision than making bracelets, such as giving them tools to grow and advance within the business,” Suster says. “Some of these men didn’t know how to read and write before they got here. But now they’re doing graphic design, using Adobe Photoshop, presenting their designs. Their advances have been amazing.”

Suster is also hoping to learn from other social enterprises. She’s currently exploring working with the Los Angeles-based Homeboy Industries, an organization that helps more than 10,000 former gang members and previously incarcerated men every year with training and support.

“I want to see if I can bring what I did in El Salvador to Los Angeles,” says Suster, who’s sitting through anger-management and domestic-violence intervention classes with participants in Homeboy’s programs. “It’s a year of exploration for me, looking at challenges in the business, coming up with a strategic plan for growth.”

Opportunities to use and develop technology like this help the company reach more young people. The Sequence Ambassador program is a new year-long leadership plan for college students who want to turn a personal mission into business, and to further develop Sequence as a leading business model for violence prevention.

“The challenge was to multiply the impact by expanding to new markets,” says Eliana Bardi, Sequence’s director of business development, who recently graduated from Georgetown University’s master’s program in Professional Studies and Integrated Marketing Communications. “My research showed an opportunity in reaching college students and spreading the #NoViolence message across the new generation of agents of change. Not only is there a growing demand for social entrepreneurship knowledge, but there is also a need for mentorship while you’re hitting the ground running.”

Suster and Bardi will tour universities and colleges this fall to talk about how to go from mission to market, and to promote the ambassador program.

Students who have previously reached out to Sequence are encouraged to apply, as well as others who express interest. They’ll play a key role in disrupting the cycle of violence by testing their entrepreneurial skills with Sequence products, while also engaging with mentors from a community of social entrepreneurs. For instance, a student can approach a sports team and show players how they can customize their accessories to align with team colors or events using the revamped website and augmented-reality tool.

Also born and raised in El Salvador, Bardi knew about Sequence and has friends in common with Suster, so she presented a proposal to Suster in September 2016 to bring more young people into the #NoViolence movement.

“That’s the sad thing, growing up in El Salvador: You get used to violence,” Bardi says. “Then you realize the freedom of walking in the streets once you’re away. It starts like a pounding need of doing something when you’re out, when you’re seeing this contrast of lifestyle. I wouldn’t have noticed how afraid I am every day if I hadn’t left.”

Bardi is able to visit her family often when she goes to the Sequence workshop, where she’s become inspired by the work and impact they’re making.

“I really wanted to have an impact, and now that I’ve seen the work of artists in the workshop, I’ve committed completely,” she says. “When you’re a student and you want to create change, you’re looking for companies like these, looking for something that’s already started, a platform that could help me become an agent of change. I found that through Sequence.”