A cluster of ancient footprints in the Arabian desert offers the clearest evidence yet for the early origins of modern elephants’ social structure, according to a Yale-led research team.

Roughly seven million years old, the prints represent the movements of at least 14 prehistoric elephants through the inland desert of the Arab Emirate of Abu Dhabi, anthropologists report in a paper published on Feb. 22 in Biology Letters. The research shows that early elephants exhibited social patterns typical of their modern descendants — herding by adult females and offspring, and solitary wandering by adult males. 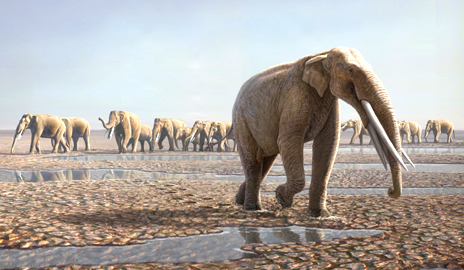 This painting depicts the site, in the Arabian desert in Abu Dhabi, as it might have appeared when the elephants passed through (Illustration by Mauricio Antòn).

“It is definitely clear that you have two social modes in elephants at this time,” said Yale anthropologist Andrew Hill, a senior researcher on the project.

Plainly visible in the crusty surface of the desert, the footprints were known to researchers for several years. But the inherent relationships among them only became clear after researchers produced and analyzed a detailed photo mosaic of the area using high-resolution aerial cameras.

The analysis revealed two distinct trackways — one belonging to a herd of about 13 elephants of varying sizes, and an intersecting trail of a lone, larger elephant. At more than 260 meters long, the latter trackway is among the longest fossilized mammalian routes ever recorded. 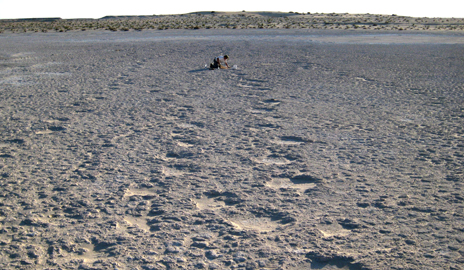 This photograph shows the trackways in the Arabian desert in Abu Dhabi (Photo by Faysal Bibi).

“It’s like walking back in time,” said Hill, whose former Yale graduate student, Faysal Bibi, now a postdoctoral fellow in Europe, is the paper’s first author.

Elephants long ago vanished from the United Arab Emirates.

Other authors are Brian Kraatz of the College of Osteopathic Medicine of the Pacific; Nathan Craig of Pennsylvania State University; Mark Beech of the Abu Dhabi Tourism and Culture Authority; and Mathieu Schuster of the Université de Strasbourg. 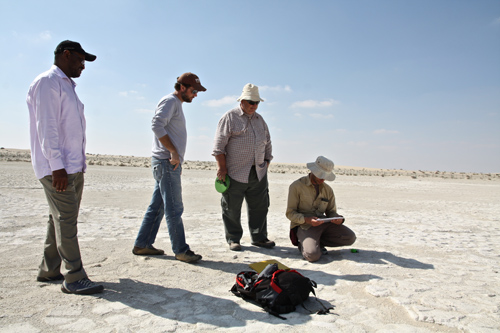 Marilyn Fox of Yale’s Peabody Museum has produced replicas of some of the individual footprints, which are now part of the museum’s collection.

More details about the project are available online.