Degraded Military Lands To Get Ecological Boost From CU-led Effort

Some arid lands in the American West degraded by military exercises that date back to General George Patton’s Word War II maneuvers in the Mojave Desert should get a boost from an innovative research project led by the University of Colorado Boulder.

Headed up by CU-Boulder Assistant Professor Nichole Barger, the research team is focused on developing methods to restore biological soil crusts — microbial communities primarily concentrated on soil surfaces critical to decreasing erosion and increasing water retention and soil fertility.  Such biological soil crusts, known as “biocrusts,” can cover up to 70 percent of the ground in some arid ecosystems and are dominated by cyanobacteria, lichens, mosses, fungi and bacteria, she said.

The project is aimed at restoring fragile habitats in desert areas that have been affected by the movement of U.S. military vehicles, including tanks, as well as high foot traffic, said Barger, a faculty member in CU-Boulder’s ecology and environmental biology department.  The team has two U.S. Department of Defense study sites — Fort Bliss, which straddles southern Texas and New Mexico and is located in a hot desert environment, and the Dugway Proving Ground in northwest Utah, seated in a cool desert environment.

“Biocrusts often are associated with increased soil nutrients and water retention, but their most important task is to stabilize soil surfaces against wind and water erosion,” Barger said. “While most biocrusts are relatively resilient to wind and water erosion, they are highly susceptible to compressional forces like those generated by foot and vehicle traffic associated with ground-based military activities.”

At military installations like Fort Bliss, the Dugway Proving Ground and in the California/Arizona Maneuver Area in the Mojave Desert used by Patton’s troops, scars of past military activity still are evident, said Barger. “You can go to these places and see that the biocrusts in the old tank tracks, for example, are completely different than nearby biocrusts undisturbed by military activity.” 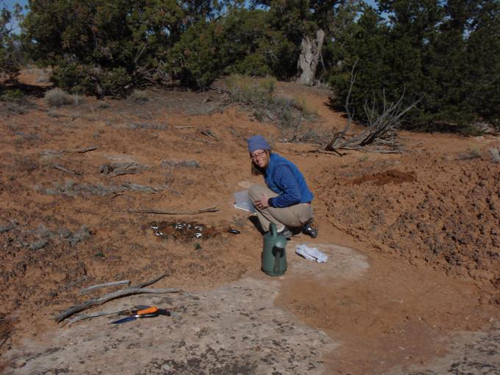 Assistant Professor Nichole Barger is targeting the restoration of biological soil crusts at two U.S. Department of Defense installations in the West where the ground surface has been damaged by past military activity. Photo courtesy Sarah Castle

The project is being funded by a five-year, $2.3 million grant from the Strategic Environmental Research and Development Program, the U.S. Department of Defense environmental science and technology program that partners with the U.S. Department of Energy and the Environmental Protection Agency.  The research team also includes Jayne Belnap, Michael Duniway and Sasha Reed from the U.S. Geological Survey’s Biological Resources Division in Moab, Utah and Ferran Garcia-Pichel of Arizona State University in Tempe.

The first step of the program will be to grow biocrusts in laboratories at ASU, said Barger. “Our approach will be to expose laboratory biocrusts over time to a physiological ‘boot camp’ that includes increasing stressors like heat, light and dryness,” she said. “By doing that, we believe the biocrusts we eventually transplant into the study areas will have a higher probability of survival.”

The lab-grown biocrust products will be dried, bagged and transported to field test sites at each respective military installation and sprinkled on soil surfaces, said Barger.

Once in the field, the stress-adapted biocrusts developed in the lab nurseries for both hot desert and cool desert environments will be combined with other soil stabilization strategies, she said.  The team, for example, will also experiment with adding polyacrylamide — a soil-stabilizing compound shown to increase soil porosity and reduce erosion, compaction, dustiness and water run-off — to the mix.

The researchers will evaluate the effectiveness of such soil “inoculations” and determine the optimum dosage for the test sites. Following the assisted recovery of the local biocrusts at Fort Bliss and the Dugway Proving Ground, the team will begin a series of seeding trials to develop strategies for native plant re-establishment, Barger said.

The last step of the project will involve a series of rainfall simulations and wind tunnel experiments combined with broad-scale soil erosion modeling to evaluate the influence of biocrust and native plant restoration in terms of precipitation and soil erosion.

While DOD military installations cover nearly 30 million acres — 70 percent of which are located in arid regions of the West — Barger said the research also could aid in the effective management of other federal lands. “We think our work on biocrusts also will be of interest to land managers at agencies like the Bureau of Land Management and the U.S. Forest Service,” Barger said.

The adaptation of biocrusts to extreme environments likely will come into play even more as climate change continues to heat and dry the West, she said.  “We expect the drought in the Southwest to intensify as a result of climate change, and this project should tell us more about how adaptive these biocrusts are under shifting environmental conditions.”

The research project also has health implications, said Barger, since the disturbance of biocrusts can trigger the release of significant amounts of atmospheric dust, a dominant pollutant in some desert metropolitan areas. “There is a broad societal interest in stabilizing dryland soils in order to protect not only the functioning of local ecosystems but also human populations that reside in surrounding communities.”

“In terms of tackling an important environmental issue, this is by far the most exciting research project that I have been involved in,” said Barger, who has worked in Hawaii, Central America, South America, China and South Africa.