Defeating drug resistance is all about the strategy

Scientists are locked in a perpetual race with deadly bacteria, struggling to come up with new drugs as bacteria evolve new defenses. Corey Compton has demonstrated that a strategy focused on how bacteria develop resistance can give drugs — new and old — a leg up.

PROVIDENCE, R.I. [Brown University] — Each year, according to the Centers for Disease Control, at least 2 million people in the United States are infected by bacteria that are resistant to antibiotics. Of those, 23,000 die. Corey Compton, a 2015 Ph.D. graduate in Brown’s Department of Chemistry, dedicated his dissertation work to finding new ways to battle these drug-resistant bacteria. 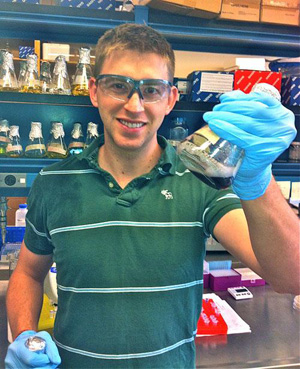 Corey Compton. Dissertation: A Multidiciplinary Approach for the Development of Novel Therapeutic Agents for the Treatment of Bacterial Infections. Image credit: Brown University

Over the course of dissertation research, Compton helped to develop four entirely new antimicrobial compounds capable of killing dangerous bacteria. But the new compounds were not the most important part of his work, Compton says. The important thing is understanding the mechanisms by which those compounds act.

“For every single antibiotic deployed since the 1950s, there is substantial resistance today,” Compton said. “If I made the best antibiotic in the world today, in 40 years we wouldn’t be talking about it anymore. So for my thesis, the idea wasn’t necessarily to make new drugs, but to think about this in terms of strategies to circumvent resistance.”

By thinking strategically, Compton said, it becomes possible not only to develop new drugs, but also to keep them effective for longer and even bring back drugs that have lost their effectiveness.

“The strategy was really my focus,” he said. “The drug is just a tool for developing the strategy.”

Most of Compton’s dissertation work focused on Mycobacterium tuberculosis. Tuberculosis is one of the deadliest infectious diseases in the world, second only to HIV/AIDS in the number of lives it claims each year. While global public health efforts have helped decrease annual deaths in the last decade or so, that progress is threatened by the rise of multidrug-resistant infections.

Working with Jason Sello, associate professor of chemistry, Compton helped to show that that TB has a critical chink in its armor — a vulnerability that no antibiotic drugs currently on the market have tried to exploit. That vulnerability involves a cellular enzyme called ClpP.

ClpP can be thought of as a cellular garbage disposal. The barrel-shaped enzyme takes in and chews up proteins inside the cell that are damaged, misfolded, or simply unnecessary to the cell’s function. ClpP’s function is particularly important to M. tuberculosis. Genetic studies had shown that when the genes that encode ClpP are deleted, tuberculosis bacteria can’t survive.

That gave Compton and Sello an idea: If TB bacteria need ClpP to survive, then perhaps a compound that disrupts ClpP activity could kill the bacteria. Another research group had shown that compounds called beta-lactones could disrupt ClpP in other organisms, but nobody had ever tried them in M. tuberculosis. So Compton synthesized several new beta-lactones and showed that two of them were indeed effective in killing TB bacteria — just as effective as streptomycin, a commonly used TB treatment.

While the beta-lactones Compton developed are an intriguing possibility for drug development (beta-lactones have since been used, in fact, in an antibacterial cream developed in Germany), the real value of the research wasn’t the compound itself, Compton says. Rather, the important thing was showing that it worked through a mechanism that no other drug had exploited.

“The big finding is you can hit ClpP, and it kills the bacteria,” Compton said. “It was never about the beta-lactones themselves, it was about the strategy. Now we have a new drug target for TB.”

Getting past the guards

Another of Compton’s strategies involved getting around drug efflux pumps, a resistance mechanism found not just in TB but a wide variety of dangerous bacteria. Efflux pumps are proteins that stand guard along bacterial cell membranes, identifying antibacterial agents that pass through the membrane and swiftly ejecting them from the cell. Once a microbe’s efflux system becomes sensitive to a particular drug, that drug is rendered essentially ineffective.

For his research, Compton worked with a promising new class of antibacterial compounds called ADEPs. The compounds have been shown to kill a variety of bacteria, but aren’t terribly effective against M. tuberculosis. Research had shown that efflux might be the reason.

Compton showed that the M. tuberculosis’ efflux pumps grab a particular fragment of the ADEP molecule in order to eject it. In might be possible then, Compton thought, to use that fragment as a decoy, delivered alongside the full ADEP molecule. The efflux pumps might preferentially grab the fragment, leaving the ADEPs to stay inside the cell and kill it.

It worked. While the efflux system was flummoxed by the decoy fragments, it wasn’t able to pump out the ADEPs. The result was a marked increase in the ability of ADEPs to kill M. tuberculosis.

And while having a potential new weapon against TB is important, the key to the work was the general strategy for circumventing efflux. The decoy strategy could conceivably be used to bolster any drug that is stymied by an efflux system. The strategy could restore effectiveness to older drugs and give new drugs a longer life. The approach has important applications not only in bacteria, but also in cancer therapy. Cancer cells are known to have drug efflux systems, and the decoy strategy could be useful in that setting as well.

“If we can get around efflux, we give a drug several more years [of effectiveness] right off the top,” Compton said.

After spending his time at Brown looking for new avenues in the fight against deadly bacteria, Compton is now planning to head down a new avenue of his own. He’s turned down postdoctoral positions in chemistry. Instead, Compton is off to business school in pursuit of an M.B.A.

“I think I have some good scientific ideas, but what I really want to do is get those ideas out there and actually use them to help people,” Compton said. “I think to do that I need a business understanding.”

Too often, Compton says, there’s a disconnect between the scientists and the business people who help take ideas out of the lab and put them into practice.

“The business people and the science people speak different languages,” he said. “They talk past each other. I think I can bridge that gap.”

And while starting a master’s program after completing a Ph.D. might seem an unorthodox choice, it suits Compton just fine.

“I’ve never been one to walk a straight line. I like to create my own path.”