You could say that the economic field of benefit-cost analysis has been stuck in a loop on a specific matter for 70 years — a kind of logical figure-eight that leads not forward, but back upon itself.

And you could further say that, together with colleagues, Richard Zerbe, longtime UW professor in the Evans School of Public Affairs, may have solved this logical paradox — or at least greatly clarified it.

“It gradually dawned on me, over a period of years,” said Zerbe, who has the owlish look of the classic absent-minded professor and is often seen on campus sporting a black fedora. “It was never that I thought I had the key, so much as I was bothered by the existence of the problem.”

Zerbe and colleagues have clarified — and possibly untangled — this logical loop with a succession of research papers, but the most important to the question, he said, is titled “Scitovsky Reversals and Practical Benefit-Cost Analysis.” That article has now been accepted and awaits publication this spring by the Journal of Benefit-Cost Analysis.

But first, a question there’s really no avoiding: What exactly is benefit-cost analysis? 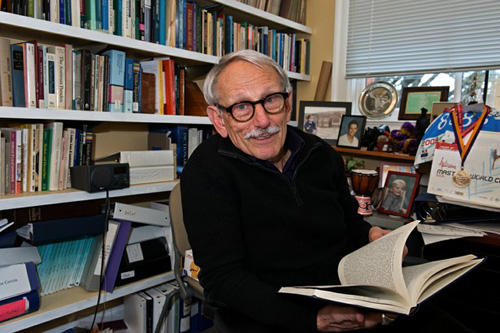 It’s a way of determining if a certain course of action is worth taking, given its consequences. The online Concise Encyclopedia of Economics offers that “whenever people decide whether the advantages of a particular action are likely to outweigh its drawbacks, they engage in a form of benefit-cost analysis.” (And just to keep things interesting, it’s sometimes called cost-benefit analysis instead.)

In public projects, the site states, benefit-cost analysis is a “sometimes controversial” way of evaluating the pros and cons of considered policy changes and to express the effects of the change in dollar terms.

Zerbe explained further: “In practical policy economics a project is considered worthwhile when the gains from it exceed the losses. Gains are measured by the willingness to pay for them and losses by the willingness to accept payment to bear them.” That’s the standard measure in benefit-cost analysis, he said, created in 1938 by British economists Nicholas Kalder and Sir John Hicks, which came to be known as the Kaldor-Hicks measure.

But then in 1941, along came economist Tibor Scitovsky, who found something odd. He pointed out that in some situations, the very Kaldor-Hicks measure used to justify a new action could be used just as well to justify the exact opposite — a return to the status quo.

Welcome to the Scitovsky Paradox, which sounds like a chess gambit or maybe an old “Star Trek” episode.

But Zerbe said he and his colleagues Andrew Schmitz and Richard Just are showing that the reversal will not occur in in most cases, if the transaction involves what are called “normal” goods.

“Normal” goods, in economic talk, are goods that a person will buy more of, or at least not less of — with an increase in their income. It’s stuff we enjoy consuming and would buy more of if we could.

There’s an exception pertaining to situations of certain technological change, but, on the whole, if goods are normal and not inferior, Zerbe believes the long-discussed Scitovsky Reversals will not happen.

And so Zerbe and co-authors conclude that “the possibilities of reversals are so remote as to be safely ignored. Economists are free to continue to critically evaluate government projects using Kaldor-Hicks.”

Its more practical, real-world meaning? “In considering major projects it will focus attention on ways in which resource depletion or environmental depletion might change production relationships in a way that hasn’t been much considered before.”

Zerbe said this dismisses the “shadow” cast over the field by the possible reversals noted by Scitovsky.