A new drug, called pritelivir, may offer a new treatment option for patients with genital herpes, a new industry-sponsored – study led by University of Washington researchers has found.

The study appears in this week’s issue of the New England Journal of Medicine. The lead author is Anna Wald, M.D., professor  of medicine, epidemiology, and laboratory medicine, and medical director at the Virology Research Clinic at the University of Washington. Other UW coauthors include Dr. Amalia Magaret, Dr. Christine Johnston, Dr. Lawrence Corey, Dr. Meei-Li Huang and Stacy Selke.

“These data suggest this drug may be a potent treatment for HSV-2,” said Wald. “That’s exciting because we have not had a new drug for herpes for three decades. In addition, our approach of using viral shedding as an endpoint clearly defined the dose that should be used in future studies”

But in most cases symptoms can be mild or altogether absent. As a result, most people who have been infected with HSV-2 are unaware they are infected, though they can still transmit the virus to others. 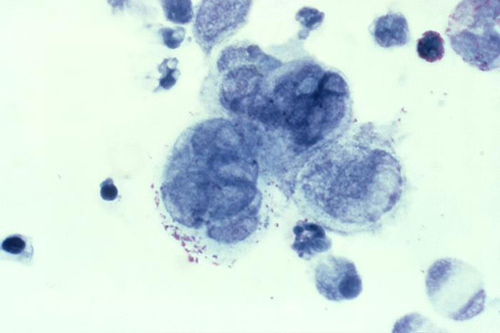 A micrograph of genital herpes virus within tissue removed from a genital sore. Image credit: CDC

Currently, there are treatments that shorten outbreaks, prevent recurrences and reduce transmission to sex partners, and but there is no cure.

The new drug, pritelivir, is the first in a new class of drugs that inhibit HSV by targeting a different part of the virus’s replication machinery, the helicase-primase enzyme complex.

In the new study, 156 patients with genital HSV-2 infection were randomized to receive either placebo or four different dosage regimens of the new drug for 28 days.

All the patients kept a diary recording any signs and symptoms of the infection and swabbed their genital areas daily. The swabs were then tested to detect and quantify any shedding of the virus.

The 75 mg a day dosing schedule proved to be the most effective, the study found. That dose was associated with an 87 percent reduction in days of viral shedding, from 16.6 percent among those taking the placebo to 2.1 percent among those taking 75 mg of the drug a day. What’s more, substantially less virus was present during breakthrough shedding in persons receiving pritelivir, another indication of the drug’s efficacy.

Side effects of the treatment were few and mild, and there were no signs of drug resistance developing. However, further clinical studies of the drug are on hold, while the U.S. Food and Drug investigates the findings of a toxicology study in which monkeys receiving high doses of pritelivir, doses 70 to 900 times as high as a 75 mg dose in humans, developed blood and skin abnormalities.