Daniel Block and The ‘Feel of Not to Feel It’

The History Channel and other outlets insist that knowing about the past is not enough: It must come alive and we must feel it. But are our emotions and sentiments a reliable guide to historical understanding? Daniel Block finds that Wordsworth, Keats, and other British Romantic writers may have something new to offer about the use and value of our affective experience.

It is certainly familiar turf for Baby Boomers, this persistent effort to figure out the ’60s or ’70s. Can history be parsed — actual occurrences considered apart from emotion-laden memories? And can a reliable picture of the whole be teased out, something that might be enriching, informative, or useful?

Daniel Block has been studying writers of the British Romantic era — the poets Keats and Wordsworth, the historical novelist Walter Scott and others. It’s a great, rich body of writing that speaks to the formation of historical feeling.

“One of the many ways Romanticism remains contemporary is in our desire for evocative history,” Block said. But many of the Romantic writers were also interested in exploring the other side of experience — experience modulated by attenuated emotions, exhaustion, fatigue, melancholy.

“It’s counter-intuitive. We think of Keats as the great sensuous poet, and the dominant reading is that he’s deeply invested in sensibility or sentimentality,” Block said. “I’m offering a different Keats, one who is interested in understanding emotions that enact their own undoing.”

Block’s dissertation, titled “The Feel of Not to Feel It”: British Romanticism, Melancholic Historiography, and the Degree Zero of Emotion, explores the counter-intuitive reading. The Romantic era literature of the 18th and early 19th centuries reflects a time of change, of loss. It was a time when the French Revolution and the Napoleonic Wars remade political life; economic forces were moving people from the countryside to cities. 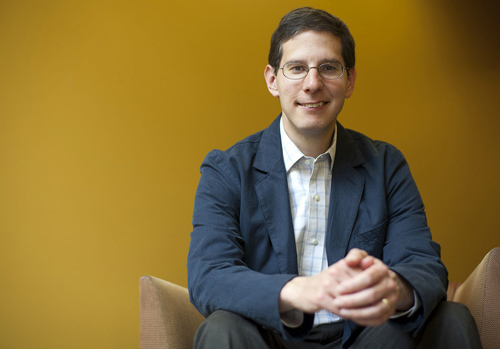 Daniel Block. “One of the many ways Romanticism remains contemporary is in our desire for evocative history.” Image credit: Mike Cohea/Brown University

Writers drew upon the language of melancholy to signify great tiredness, regret, nostalgia, the pathos of loss — even the emotion that comes from reflection on emotions of times past. “Melancholia has a wonderful doubleness,” Block said. “Does it mean fatigue, exhaustion, apathy bordering on depression? Or is it more of an indulgence in regret? I see both in the literature. Even the idea of impatience — a kind of forward-looking perspective, an eagerness to move ahead — has its links to wrath, frustration, the aggravation of feeling stuck, of not being able to move. This functions in Keats.”

The Romantic poets, it turns out, struggled with themes and issues that can have important connections even to the 21st century.

“I think about the experience of the Millennial Generation during the ’90s and early 2000s and the kind of apathy or listlessness that was the experience of my generation — as opposed to the nostalgia for political activism that many people have for the ’60s,” Block said. “I graduated college in 2002, on the early cusp of the millennials. I saw the wry detachment, cynicism, and irony of Generation X. I inherited that persona, if you will, and then saw it immediately expire for a different structure of feeling after September 11.” Along these lines, Block’s broader motive is “to see how [Romanticism’s] movements of thought are really still with us — within criticism, within the academy, within popular culture.”

“We see language and communication as a pragmatic act of transmission: I say something, you receive it, and we’re done. But the analysis of literature offers complications, movements, possibilities that we tend to overlook. It opens a whole new domain of our experience. I want to use literature to open new dimensions in our own contemporary emotional life.”

Could we, would we, ever expect to find poetry in which all emotional energy is blunted, in which the poet has achieved the “degree zero of emotion?” Keats and the others were ambivalent on that point, Block said. In the three stanzas of his “In drear nighted December,” Keats observes that leafless tree branches do not recall “their green felicity” and the frozen brook no longer feels its summertime burbling.

Looking toward the eventual “drear nighted December” of his own life and human lives in general, Keats hopes that the bleakness of that time might blunt the capacity for sentimental reflection on passed youth, that not feeling might become a sort of appropriate emotion. But unlike the “too happy” tree and brook, human beings cannot so easily escape their emotional constructions and sentient experiences. No “sweet forgetting” for them; they writhe at memories of past joys no longer attainable. Whether a December with attenuated emotions would bring its own cold comfort remains to be seen, if only in poetry that cannot fully articulate its own emotional content:

The feel of not to feel it …
Was never said in rhyme.